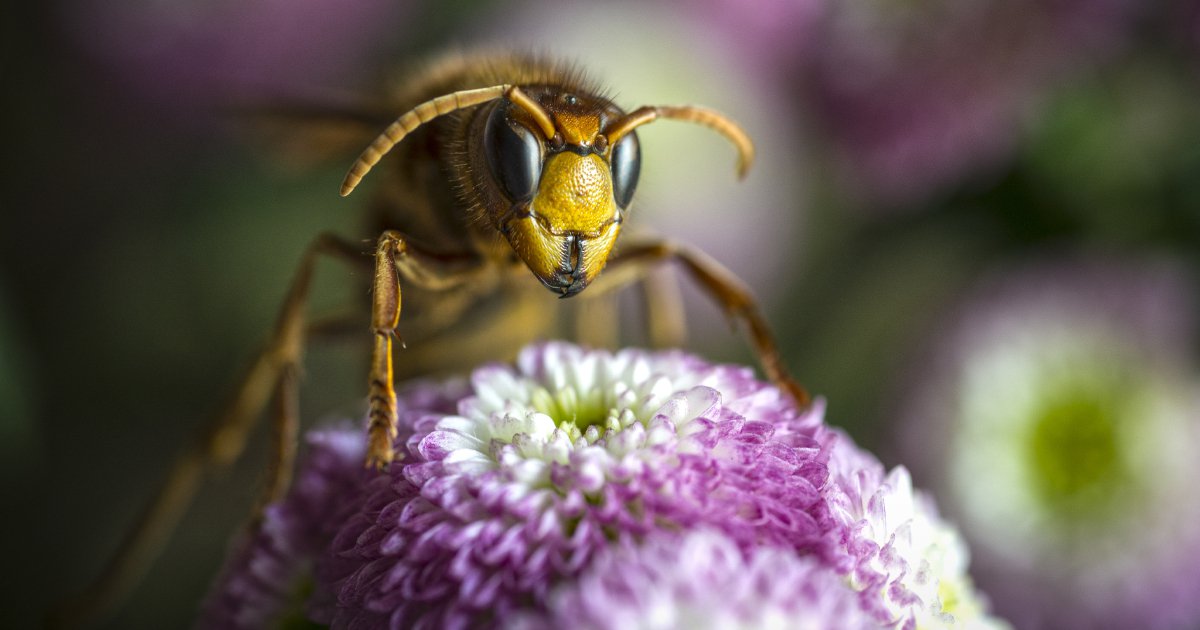 Asian hornets are a threat to honey bees and wildlife ecology (Picture: Getty)Britain could be facing its biggest ever invasion of killer Asian hornets, experts have warned.
The number of queens spotted on the island of Jersey – a key battleground to stop a mass influx to the UK – is already close to surpassing the highest ever annual total.
A total of 63 queens have been recorded so far, 38 by members of the public and 25 caught in traps, the Jersey Evening Post reports.
This is just six shy of the 69 hornet queens found in 2019.
The giant wasp, or ‘murder hornet’, can grow as large as two-and-a-half inches long, and is capable of delivering multiple stings, each carrying toxic venom.
Jersey’s Asian hornet co-ordinator Alastair Christie said: ‘We are on track to surpass 2019 numbers, but trapping in 2019 was minimal and we are also a lot better at it now.
‘So with the increase in trapping and the help from the public it stands to reason that we would find more.

Asian hornets can be spotted by a yellow/orange band across their lower half (Picture: Getty/EyeEm)

People with allergies should seek medical attention if stung by a large hornet (Picture: SWNS)‘I am hoping that we have caught a greater proportion of the queens this year and that the number of nests won’t be as high.’
Mr Christie said the first worker hornets would be emerging in the next few weeks.
He added: ‘I am optimistic that we are doing a good job of catching the queens.’
There are concerns the growing number of sightings on Jersey could mean a bumper year for mainland UK.
The yellow legged wasps were accidentally introduced to France from China in 2004, and they have been spreading rapidly throughout Europe ever since.
They first arrived in the UK in 2016 with a nest spotted in Tetbury, Gloucestershire.

Asian hornets make their nests on tree trunks (Picture: Getty/iStockphoto)Hornets are typically found in eastern and southeastern Asia, but hundreds have been sighted in Blaine, Washington, close to the Canadian border.
The invasive predators are a threat to UK wildlife because they can eat up to 50 honey bees in a single day, adversely affecting pollination.
The sting from an Asian hornet is similar to that of the common bee and people with allergies must get medical attention if they are stung by one.
Most serious incidents stem from people approaching or disturbing their nests.

MORE : How to detect the deadly Asian hornets coming to the UK