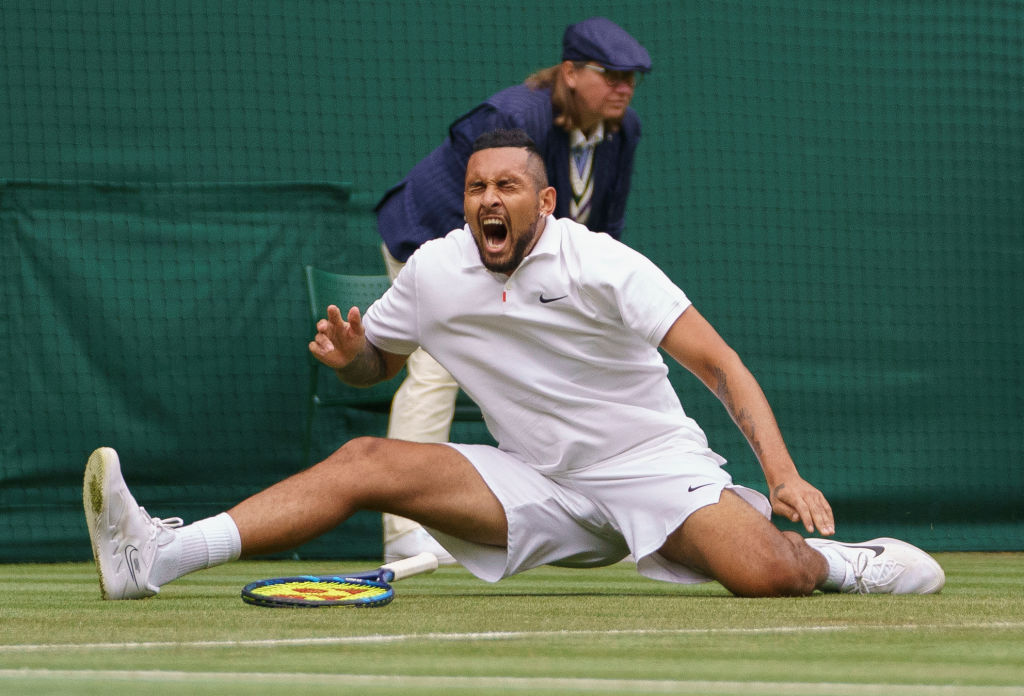 Kyrgios suffered his own fall after Williams’s withdrawal (Picture: Getty)Nick Kyrgios admitted it was ‘devastating’ to see Serena Williams withdraw from Wimbledon but attempted to bring a sense of perspective after his own ‘brutal’ fall.
Kyrgios crashed down to the turf and rolled around in agony at 6-6 in the fifth set of his thrilling first-round match with France’s Ugo Humbert but admitted he would have carried on ‘on one leg’ if he had to.
It was a heart in mouth moment for the Court 1 crowd just a day after Williams and Adrian Mannarino – who was leading Roger Federer before his own fall – had both retired on Centre Court with injury.
An inquest has begun around the All England Club into whether the grass is particularly dangerous this year compared to others but Kyrgios was keen to play down any fears for player safety.
‘You kind of always expect the grass to bring out those moments where you get wrong-footed,’ said Kyrgios. ‘It’s happened to me before. I actually slipped at Queen’s once.
‘But, yeah, look, I’m not sure, I think it was 6-All in the fifth or something, where I was always going to get up and play. I made it that far.
‘I haven’t been playing many tournaments. I’m here. No matter if it was something bad, I was always going to get up and play. With one leg, I was going to finish the match.

Kyrgios was in good spirits (Picture: Getty Images)‘But, yeah, just resilient, man. I really enjoyed being out there. Again, he’s a hell of a player. It could have gone completely his way. There was only a couple of fault points in it. He’s going to do some special, special things in this sport.
‘Yeah, my hip’s fine. Very lucky. Obviously it’s devastating to see some big names go out due to an injury like slipping on the court. Mannarino was putting on a great match against Federer.
‘Obviously seeing Serena, the legend, go down, it’s not easy. I’m very lucky it wasn’t nothing too severe.’

Mannarino was forced to retire (Picture: AFP via Getty)He added: ‘The tennis schedule is brutal, it’s absolutely brutal. You have the French Open, straight on the grass, and you’re just expected to bring out your best tennis from week to week.
‘Look, I don’t know if there’s a solution. It just is what it is on the grass. On the clay, it’s obviously you got the sliding, it’s a bit more safer. The grass has just got that unpredictable factor where it’s tough. There’s no guarantee that any time you go out there you could be injured. It is what it is, you know.
‘It’s tough to say because obviously Serena, she’s like the G.O.A.T. You know what I mean? It’s tough to say it is what is. Unfortunately it’s, like, the grass. It’s tough.’
More: Tennis

Tim Henman, the former British No. 1 who is a committee member at the All England Club, is in no doubt that the courts are not dangerous.
‘Absolutely,’ he told the BBC when asked if they were safe to play on. ‘It’s just that because it’s a natural surface, there is always that risk of slipping on grass at the best of times.
‘I think because we are not getting that wicking effect from the air movement from the wind for the first few days, it’s just taking a little bit longer for that process to happen.’

Humbert enjoyed the match in spite of defeat (Picture: Getty)Kyrgios’s beaten opponent was disappointed but enjoyed the atmosphere on Court 1.
‘It’s always an honor to play against Nick,’ said Humbert, who also lost to him in five sets in the second round of the Australian Open. ‘When he’s playing good, he’s one of the best players.
‘It was really fun on court. It was a really big match. I’m very proud of myself. It was a big game, really big game.’
For more stories like this, check our sport page
Follow Metro Sport across our social channels, on Facebook, Twitter and Instagram