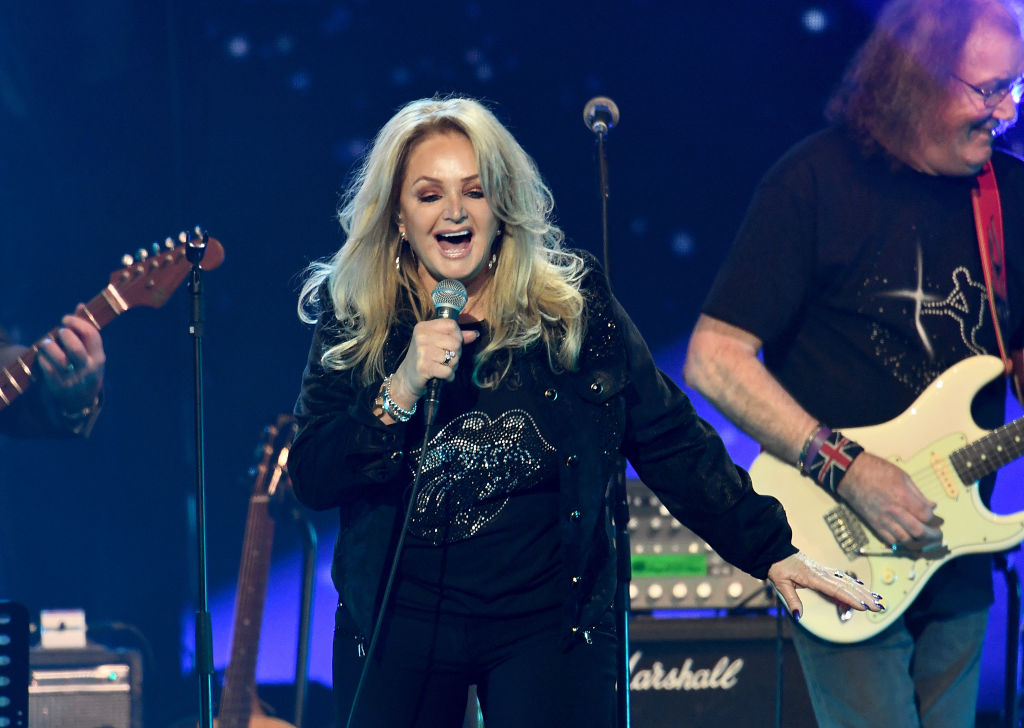 Bonnie Tyler forgot some rather important details about her latest album during an appearance on Loose Women, leaving viewers in hysterics.
The Welsh singer had a few hilarious fumbles during her interview that resulted in laughs from the entire panel as well as fans watching at home.
‘My new album’s called… um… uh…,’ she uttered via video link, before panellist Ruth Langsford stepped in to help her finish with the name of the album, The Best Is Yet to Come.
‘There are some great songs on there and I think it’s just going to work well with my live band,’ she added, brushing off her minor faux pas.
But the slip-ups didn’t end there, as Bonnie also struggled to remember the name of one particular track.
She explained that she found a much-needed addition to the album when she was invited to have an audience with the Pope in 2019.

Bonnie Tyler’s mind went blank over her new album on Loose Women (Picture: ITV)‘While I was there I was doing a Christmas concert and there was a bagpipe player there and he sounded so fabulous. I had just recorded a song called uh… uh… gosh!’ Bonnie said, stumbling on her words again, with the panel cackling in response.
‘I had just recorded a song called… friggin’ hell, anyway, a great song, and I knew the bagpipes would just sound fabulous on there.
‘So I said to him you know, Leo, I’ve just recorded an amazing song and you would sound amazing on it. I sent him the song and he loved it and he’s done an amazing version for it.’
Bonnie said she couldn’t wait to perform in front of a live audience again, which she has missed during Covid restrictions.
The segment left viewers in stitches, with many taking to Twitter to share their delight over the Total Eclipse of the Heart legend’s appearance.

@loosewomen How lovely is Bonnie Tyler, please have her on the show again, for longer next time.ð— Sandra O’Neill (@SandraONeill1) April 21, 2021

‘Bonnie Tyler… What an absolute crazy blast. She needs to be on the panel,’ one person tweeted.
‘Bonnie Tyler being on Loose Women today is giving my life a purpose,’ another fan wrote.
Viewers couldn’t get over how amusing and entertaining she was, with one person saying that she ‘seems a laugh’.
More: Loose Women

The 69-year-old is known for her distinctive husky voice and came to prominence with the release of her 1977 album The World Starts Tonight.
The Best Is Yet to Come is the 18th studio album by the crooner, which was released on 26 February this year.
Loose Women airs weekdays at 12.30pm on ITV.
Got a story?
If you’ve got a celebrity story, video or pictures get in touch with the Metro.co.uk entertainment team by emailing us celebtips@metro.co.uk, calling 020 3615 2145 or by visiting our Submit Stuff page – we’d love to hear from you.

MORE : Loose Women stars share sweet message for Jane McDonald after partner’s death: ‘He was part of the family’