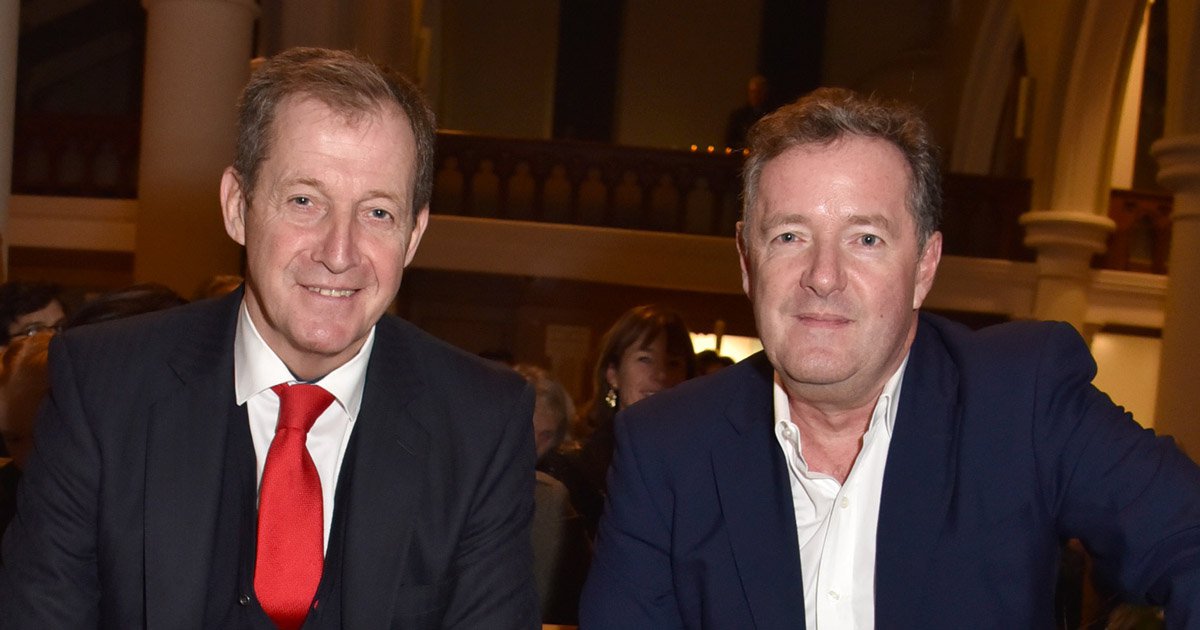 Piers Morgan pens piece about Alastair Campbell on Good Morning Britain (Picture: Getty)After storming off the set earlier this year, Piers Morgan has spoken about Alastair Campbell temporarily replacing him on Good Morning Britain.
Alastair is to co-host the show alongside Susanna Reid during Mental Health Awareness Week, from May 10 to May 12.
Even though the pair are friendly, Piers has now questioned why ITV bosses hired the former political advisor in the first place.
In a piece for the Daily Mail, the television personality said he agreed with ITV’s director of TV Kevin Lygo when he said ‘you can’t replace somebody’ like him.
‘My ex-TV wife Susanna Reid told viewers her new partner was “someone to provoke strong reaction and lively debate, tackle the big issues and speak in a language that real people understand”,’ he wrote.
The 56-year-old noted that those words sounded familiar to him, hinting that that’s how people had always described him.

Piers questioned why GMB hired the former political advisor in the first place (Picture: John Rainford)He also took issue with the official GMB Twitter account encouraging Alastair to engage in fiery debates and to not ‘hold back’.
Piers explained that, taking into consideration the nature of why he left the programme – following his rant against Meghan Markle – this advice seemed unwise.
‘I’ve known Alastair for donkey’s years and, despite numerous bust-ups, always got on well with him. He’s also a properly trained and very experienced journalist, which I think every news show presenter should be. So, I wish him well,’ he continued.
‘But forgive me for having a wry chuckle at the fact that I had to leave the show for declining to apologise for disbelieving Princess Pinocchio’s porky-pies, only to now be replaced by someone who has never apologised for spinning us into an illegal war that cost more than a million lives.’
Piers left Good Morning Britain in March after he was criticised for comments about not believing Meghan when she said she was denied help from the Palace while experiencing suicidal thoughts – with his rant receiving more than 59,000 Ofcom complaints.
During his final show, he also had a heated discussion with Alex Beresford about the topic, with the presenter seen storming off set.
More: Good Morning Britain

Adil Ray took over to host through April, but Piers has not been formally replaced – although there has been speculation that Richard Madeley has been eyed for the job.
Previously speaking about the role, Alastair doubled down on not being ‘the next Piers Morgan’ while filling his seat for the few episodes.
When he announced the gig, Alastair tweeted photos of himself in the studio, writing: ‘So weird to be wearing suit and tie.
‘Been in at @GMB checking the presenter chair and seeing if I can cope with the tech! And no I am NOT the new @piersmorgan BUT I will be presenting alongside @susannareid100 May 10-12 thru Mental Health Awareness Week.’
Good Morning Britain airs weekdays at 6am on ITV.
Got a story? If you’ve got a celebrity story, video or pictures get in touch with the Metro.co.uk entertainment team by emailing us celebtips@metro.co.uk, calling 020 3615 2145 or by visiting our Submit Stuff page – we’d love to hear from you.

MORE : Ant and Dec mock Piers Morgan’s Good Morning Britain exit and call for him to star on I’m a Celebrity: ‘He’ll be looking for a job’