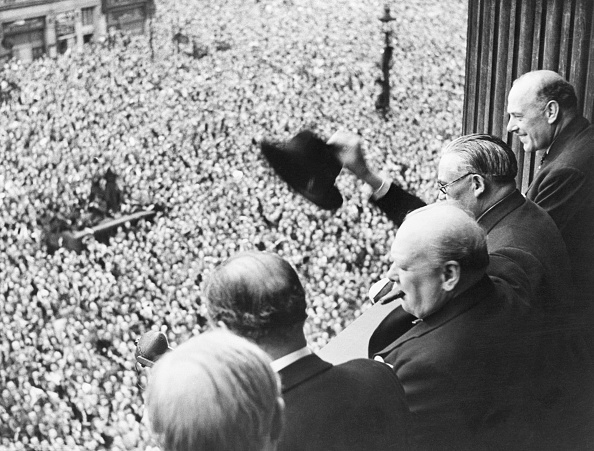 Low angle shot of Union jack bunting and coloured bunting making a ‘V’ shape. Sun shining behind it.Today is the 76th anniversary of VE Day, and while lockdown restrictions will limit celebrations, many across the country will be commemorating the day.
People of the United Kingdom will be reflecting on the sacrifice made by millions to accomplish victory in the Second World War.
It is always held on May 8, the same date that King George VI’s made the announcement of Nazi Germany’s surrender on the radio back in 1945.
Last year marked the 75th anniversary of VE Day, with last year’s lockdown also leading to muted celebrations.
People still found their own way commemorate the anniversary at home, as they will likely do again this year.
Here are some messages, quotes and images to help you mark VE Day 2021.
Messages, quotes and images to mark VE Day 2021
‘My dear friends, this is your hour. This is not victory of a party or of any class. It’s a victory of the great British nation as a whole. We were the first, in this ancient island, to draw the sword against tyranny. After a while we were left all alone against the most tremendous military power that has been seen. We were all alone for a whole year.’ – Winston Churchill

‘Humility must be the measure of a man whose success was bought with the blood of his subordinates, and paid for with the lives of his friends.’ – General Dwight D. Eisenhower

The crowds were estactic across London on VE Day 1945 (Picture: Getty‘At 11 o’clock this morning came to an end the cruellest and most terrible war that has ever scourged mankind. I hope we may say that thus, this fateful morning, came to an end all wars.’ – David Lloyd George

Prime Minister Winston Churchill addressed the public (Picture: Getty).‘In these unforeseen circumstances, we must remember those who sacrificed their lives for us to see today. We must remember them in whichever way is safe to do so. Please let’s celebrate in a way that is correct, raise a glass to thank those who made a sacrifice and also let’s remember those on the frontline today.’ – Councillor Mark Spencer, Newport’s Armed Forces Champion

The Royal Family even got involved in the festivities (Picture: Getty)‘I remember lines of unknown people linking arms and walking down Whitehall, and all of us were swept along by tides of happiness and relief.’ – Queen Elizabeth II
It was without any doubt Churchill’s day. Thousands of King George’s subjects wedged themselves in front of the Palace throughout the day, chanting ceaselessly ‘We want the King’ and cheering themselves hoarse when he and the Queen and their daughters appeared. But when the crowd saw Churchill there was a deep, full-throated, almost reverent roar. – Molly Panter-Downes

Many people held their own VE day celebrations in their gardens last year amidst lockdown restrictions (Picture: Getty)‘We are eternally grateful to all our brave, men and women, who answered the call. To defend our country, in its time of need and give us, peace in our time.’– Graham Smith, Royal Regiment of Wales Standard Bearers

Residents celebrating in a social distanced manner last year (Picture: Getty)‘VE day marked not just the end of years of struggle and of loss for Great Britain but also of the beginning of peace, prosperity and security for the next 75 years. Those that lost their lives made the ultimate sacrifice for their country. It is vital, therefore, that we as today’s Royal Navy, not only remember this sacrifice, but embody the same sense of loyalty, courage and duty as those that went before us.’ – Cdr Philip Harper RN Commanding Officer, HMS Severn Royal Navy