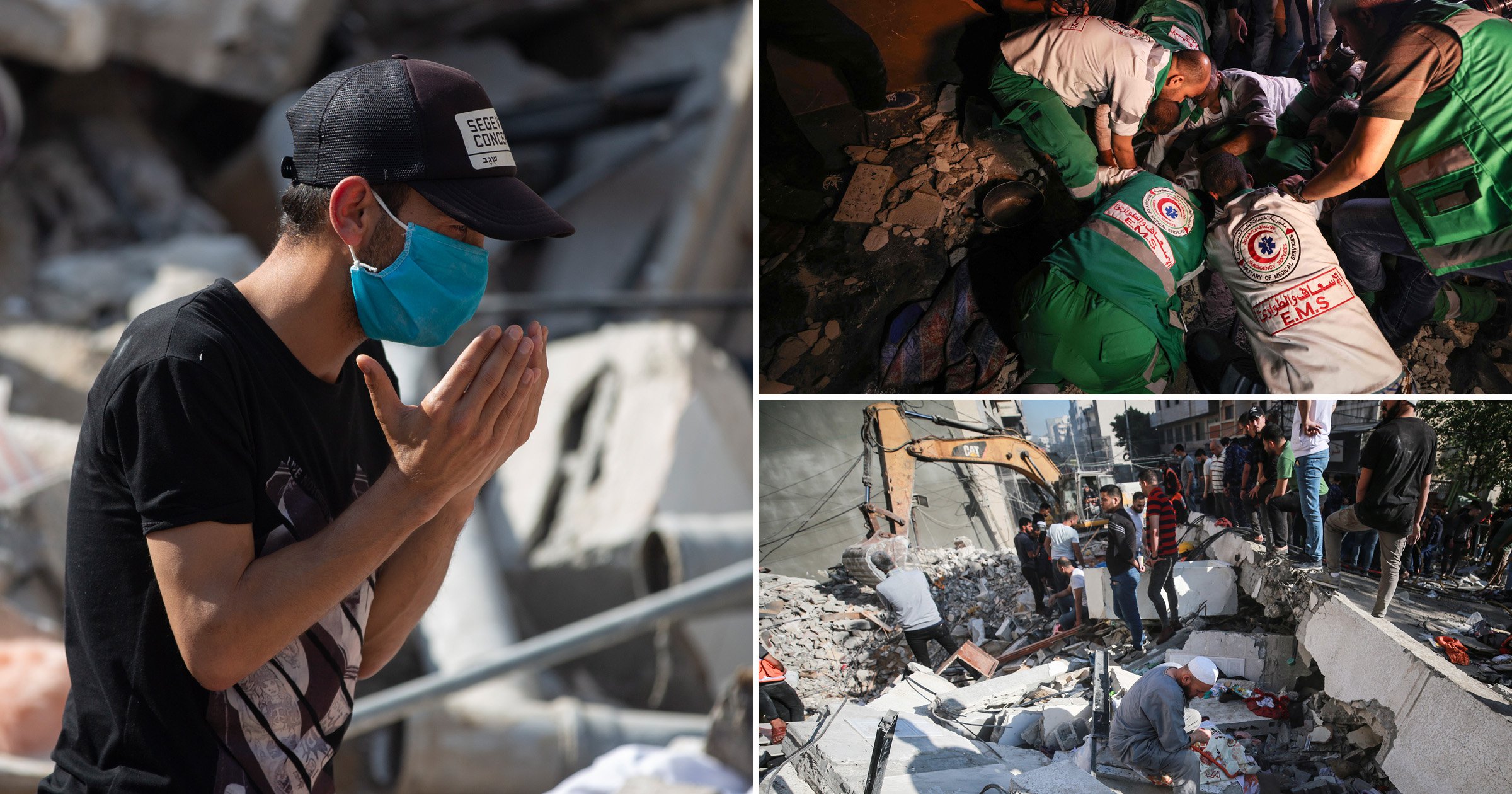 At least 26 people have been killed in Gaza this morning as rescuers work to pull survivors from the rubble (Picture: AP/AFP/Getty Images)Israeli airstrikes have killed at least 26 people in Gaza this morning in the deadliest attack since fighting began six days ago.
The Gaza Health Ministry said 10 women and eight children were among the dead while at least a further 50 have been injured.
Rescuers and medics are working to pull survivors from the rubble after Isreali aircrafts targeted several buildings and roads in Gaza City.
The latest assault came shortly after Israel said it had bombed the home of Gaza’s top Hamas leader.
A military spokesperson said it destroyed the homes of Yehiyeh Sinwar, the most senior Hamas leader inside the territory, and his brother Muhammad. Khalil al-Hayeh, another Hamas leader, also had his home reduced to rubble.
None of the senior Hamas figures are believed to have been at or near their homes when the bombs hit, with the majority of them having gone into hiding.

A man is rescued from the debris of a building following the airstrikes (Picture: Getty)

Palestinian civil defense search for people in the rubble of a destroyed house (Picture: EPA)Israel appears to have stepped up strikes in recent days to inflict as much damage as possible on Hamas, while international mediators try to broker a cease-fire. But targeting the leaders of the group will likely hinder such efforts.
A US diplomat in the region is attempting to de-escalate tensions while the UN Security Council has scheduled an emergency meeting on Sunday.
The fighting began six days ago when Hamas and other militant groups began firing rockets into Israel, after issuing an ultimatum.
Tensions over al-Aqsa mosque, a holy site in Jerusalem, and the threatened eviction of dozens of Palestinian families had been boiling over, and Hamas had demanded Israel to remove forces from the area.

A Palestinian man prays as he stands amid the rubble of buildings destroyed in deadly Israeli airstrikes in Gaza (Picture: AP)

Rescuers pull a survivor from under the rubble of a destroyed residential building (Picture: AP)The violence has fuelled protests in the occupied West Bank and stoked tensions between some Jewish and Arab citizens within Israel, with reports of clashes and vigilante attacks on people and property.
So far at least 181 Palestinians have been killed in Gaza, including 52 children and 31 women. A further 1,225 have been wounded, the Palestinian Ministry of Health said on Sunday.
Israel has reported 10 dead, including two children, one of whom was five years old.
Get in touch with our news team by emailing us at webnews@metro.co.uk.
For more stories like this, check our news page.