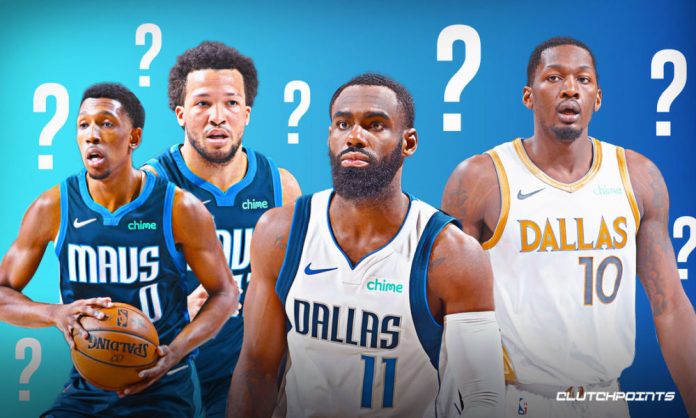 Luka Doncic and the Dallas Mavericks were able to lock in the No. 5 seed in the Western Conference and in doing so, avoided the play-in tournament. The reward for Dallas? A date with Kawhi Leonard, Paul George and the rest of the Los Angeles Clippers.

It will not be easy for the Mavericks in this series, and the odds favor LA. Dallas can get the job done though as they’ve done all season long. They’ll need others to contribute consistently outside of Doncic to have a chance and they have a cast of characters on the roster that can fill that role. Here’s the one X-factor the Mavericks will need to have step up against the Clippers in the NBA Playoffs.
Tim Hardaway Jr. has been a silent assassin this year for the Mavericks. He’s as durable as they come, playing in 70 of the 72 games for Dallas this year. He’s done some as a starer (31 games) but primarily has worked as the spark plug off the bench.
For how good of a season Hardaway Jr. has had, it largely has gone under the radar. That’s what happens when you play with a superstar like Luka Doncic, though.
Hardaway Jr. averaged 16.6 points per pop this year while shooting right near 40% from three-point range. Against the Clippers, the Mavericks will need him early and need him often.
The Clippers play stifling defense that is spearheaded by Leonard and George. Guys like Rajon Rondo and Patrick Beverley have made a living causing havoc on the defensive end as well. It won’t be easy for the Mavericks as a result.
Los Angeles has an array of options that they can fire off in the direction of Doncic and that will be their primary focus; limiting and wearing down Luka.
Doncic usually finds a way to get his but he’s also one of the better facilitators and playmakers in the association. With a lot of the eyeballs from LA being casted upon him, it will be imperative for Doncic’s teammates to step up and answer the bell. Enter Hardaway Jr.
Hardaway Jr. has made a fine NBA career out of being known for his ability to shoot the three and guard multiple positions. His offense will be the key in this series for the Mavericks.
When the double teams come on Luka, and they will, Hardaway Jr. will be the open outlet at times as he roams the perimeter.
When the Clippers rotate different defenders onto Luka to wear him down, Hardaway Jr. will need to provide the jolt off the bench.
The Mavericks have a gifted team with one of the best players in the NBA. The supporting cast is good enough to make a dent in the postseason this year. Going up against the Clippers is no easy draw but look around the Western Conference. It’s bound to be a dog fight against any of the teams that made the playoffs.
If the Dallas Mavericks want to make some noise and slide by LA, Tim Hardaway Jr. holds the key to some of those answers.

The San Antonio Spurs have officially missed the NBA playoffs for the second year in a row. Dejounte Murray and...