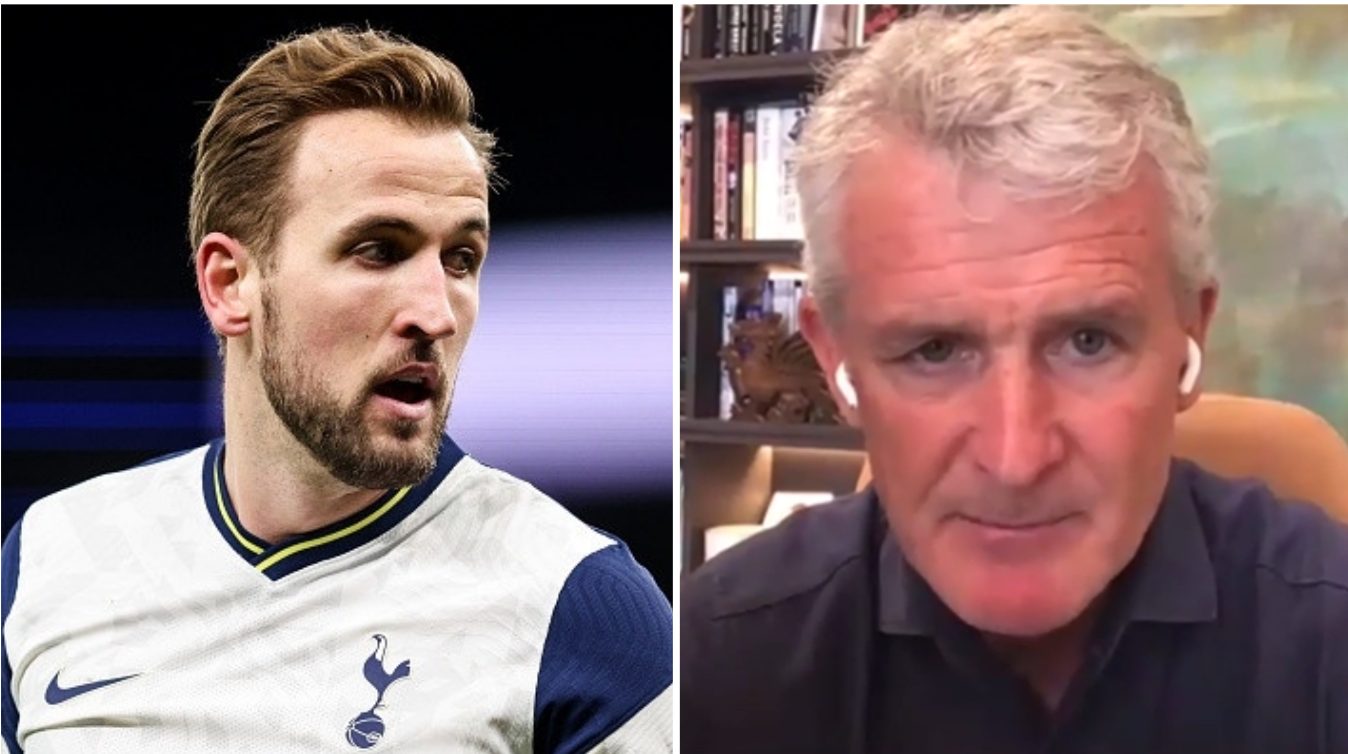 Mark Hughes would ‘love’ Harry Kane to join Manchester United (Pictures: Getty / Sky Sports)Mark Hughes would ‘love’ Harry Kane to sign for Manchester United and says the Tottenham striker would turn the Red Devils into Premier League title contenders.
Man United have emerged as one of the most likely suitors for Kane, who last week told Spurs he wanted to leave at the end of the season.
In a subsequent interview with Manchester United legend Gary Neville on Sky Sports, Kane hinted he was keen to join Manchester City to link up with playmaker Kevin de Bruyne.
But the red-half of Manchester remain in the race to sign Kane and former Red Devils striker Hughes insists the England captain would transform Ole Gunnar Solskjaer’s side, who finished second this season, into title challengers.
‘I think Harry Kane could take Manchester United back to a title-winning level,’ Hughes told Sky Sports.
‘From watching United this season, the one thing that’s always struck me is that when they don’t have that focal point to the attack, when Cavani isn’t playing and the likes of Marcus Rashford, Anthony Martial or Mason Greenwood are playing up top, it doesn’t quite function as well as it should.
‘I think United are always better when Cavani is actually down the middle. He’s done great for United this year and I think it is great news for them that they’ve been able to keep him for another year.

‘Whether that means they aren’t going to pursue Kane really forcefully because they feel in the short-term that they’ve got a solution.
‘I think from my point of view, with my red goggles on, I would love Harry Kane to be there because I think he’d be made to measure for Manchester United.
‘He’d have a lot of good talent around him, and they’d give him that platform hopefully to win trophies because clearly Harry Kane is at the point of his career where that’s what’s missing from his career.
‘He wants to make sure that the next step, if he does make a step, is going to guarantee trophies. It’s not about money, it’s not about prestige – it’s about making your mark in the game.’
Manchester United and Manchester City have also been heavily linked with Borussia Dortmund and Norway striker Erling Haaland.

Erling Haaland is being linked with a move to the Premier League (Picture: Getty)Hughes is a huge admirer of the 20-year-old, who scored 51 goals in 52 appearances this season, but says he may take time to adapt to the demands of the Premier League.
‘I’ve been really impressed by Haaland,’ Hughes added. ‘He’s clearly got a lot of attributes: he’s a big guy, lot of technical ability, quick as well over good distances which is unusual for a big guy, scores goals and does it at the highest level.
‘I go back to the thing about transition coming to the Premier League, which is a unique league, make no bones about it. This league is special and it’s different from other European leagues and it’s the league everybody wants to play in.
More: Manchester United FC

‘I think it’s easier for midfielder, full-backs, centre-halves and goalkeepers maybe to come to the Premier League.
‘But for strikers because you’re judged on goals and expected to hit the ground running, it’s not always easy to do that, so strikers come to this country a little more susceptible to vagaries of form and they don’t always hit the levels that were expected of them.
‘So bringing Haaland, without a shadow of a doubt would be good business for any Premier League club, but you would always have in the back of your mind that he may need that little bit of time to adjust to the power and the ability of the people that are going to try and make his job difficult.’
For more stories like this, check our sport page.
Follow Metro Sport across our social channels, on Facebook, Twitter and Instagram.