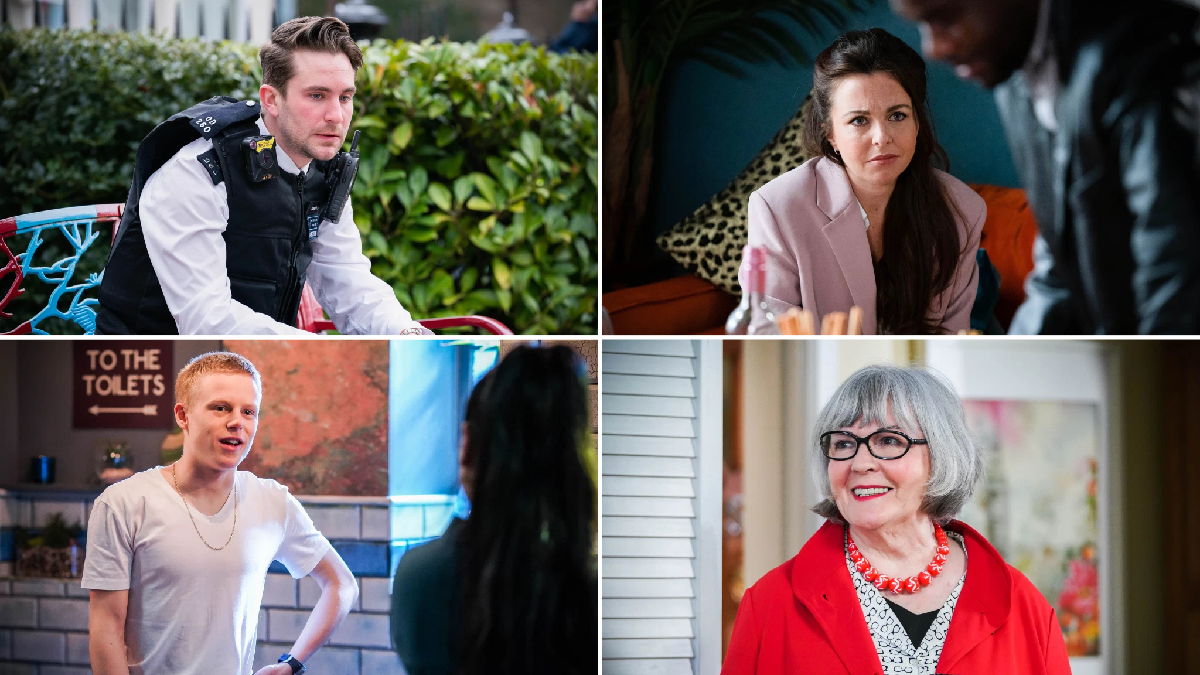 Disaster and romance in Walford (Picture: BBC)There’s high drama in EastEnders when Callum Highway (Tony Clay) gives chase to a mugger only for his colleague Fitzy to get stabbed and rushed to hospital. As Callum blames himself, will he share his woes with Ben Mitchell (Max Bowden)?
Elsewhere, with her growing bump, Linda Carter (Kellie Bright) realises it’s time to tell Max Branning (Jake Wood) the truth.
Monday June 7
Ben wants Callum to quit his job, but Callum is torn over what to do. At the same time, Phil is surprised when police arrive at the Slater house and Kat reveals that she was mugged. Kat complains that Phil was too busy to listen to her when she tried to mention it, so she orders him out. Phil tries to make amends by suggesting that they should run the launderette together.
Later, Callum and Fitzy spot the mugger and give chase. There’s a horrifying outcome when the mugger stabs Fitzy.
Rainie has had enough of Vi constantly making digs at her and warns Stuart that it’s time for her to leave. Before Stuart can pluck up the courage to ask Vi to move out, Vi spots Honey and gets an idea.
Ruby takes some parenting advice from Lola and tries to strike a deal with Lily.
Lola continues to notice small changes in Isaac’s behaviour.
Tuesday June 8 Part One

Callum blames himself (Picture: BBC)The mugger flees and Fitzy’s life hangs in the balance. Once paramedics arrive and Fitzy is rushed to hospital, Callum admits to DCI Arthurs that he blames himself for what happened.
Later, Callum is distant during his and Ben’s anniversary celebrations. Ben thinks that his recent request for Callum to quit his job is the reason, so he suggests they don’t talk about work for a while. This leaves Callum feeling worse, fearing that he can’t talk about Fitzy. He panics and leaves.
Kat turns down Phil’s offer as she fears it will turn into something dodgy. Phil promises her that he wants to keep the business legit so that Raymond has something in the future.
Isaac leaves Lola, Martin and Ruby shocked with a gesture that he believes will help Arthur. Isaac’s idea creates an awkward atmosphere and Lola continues to fear the worst.
Stuart is horrified when Vi tries to set him up with Honey. After hearing about the surrogacy plan, Vi decides to stick around and get to know Rainie better.
Tuesday June 8 Part Two
Lola sits in on a meeting between Isaac and his nurse. She worries when Isaac makes out to Rafe that he’s keeping up with his medication and everything is fine.
Isaac tries on some of Paul’s clothes and talks to Patrick about Ruby’s dad Johnny. When Isaac later mentions Johnny in conversation, Ruby is taken aback but reluctantly talks about him. Later, Isaac is intrigued when Lola mentions privately that Johnny was no angel.
Callum is snappy towards Ben as he insists that he’s fine. Callum clams up when Whitney and Kat ask him about the stabbing, so Whitney soon realises that something isn’t right.
Stuart reveals that Vi is only being nice to Rainie because she knows about the surrogacy. Bernie faces temptation when her mum insists she should eat a fry-up.
Linda realises that – with her baby bump getting bigger – she’ll soon have to tell Max about the pregnancy. She learns that Max is in Paris and Jack has taken Abi to see him.
Thursday June 10

(Picture: BBC)Stuart worries about his upcoming appointment at the fertility clinic. Rainie is also meeting up with another potential surrogate later on.
Later, Vi manages to ruin both of Stuart and Rainie’s important plans. Rainie is furious and orders Vi to go back home, but Vi decides to share a secret with her.
Nancy tells Mick that he should speak up if he’s having doubts about Max being told about the baby. Mick insists that, regardless of his own feelings on the matter, Max deserves to know the truth.
When Dana arrives at the restaurant, Iqra drops Bobby in it by suggesting that he should cook dinner for the two of them. Although Dana ends up being impressed by the food, Bobby panics when she suggests going back to his place.
Isaac searches for information on Paul’s past. Patrick urges him to let this go, but Isaac refuses to listen.
If you’ve got a soap or TV story, video or pictures get in touch by emailing us soaps@metro.co.uk – we’d love to hear from you.
Join the community by leaving a comment below and stay updated on all things soaps on our homepage.