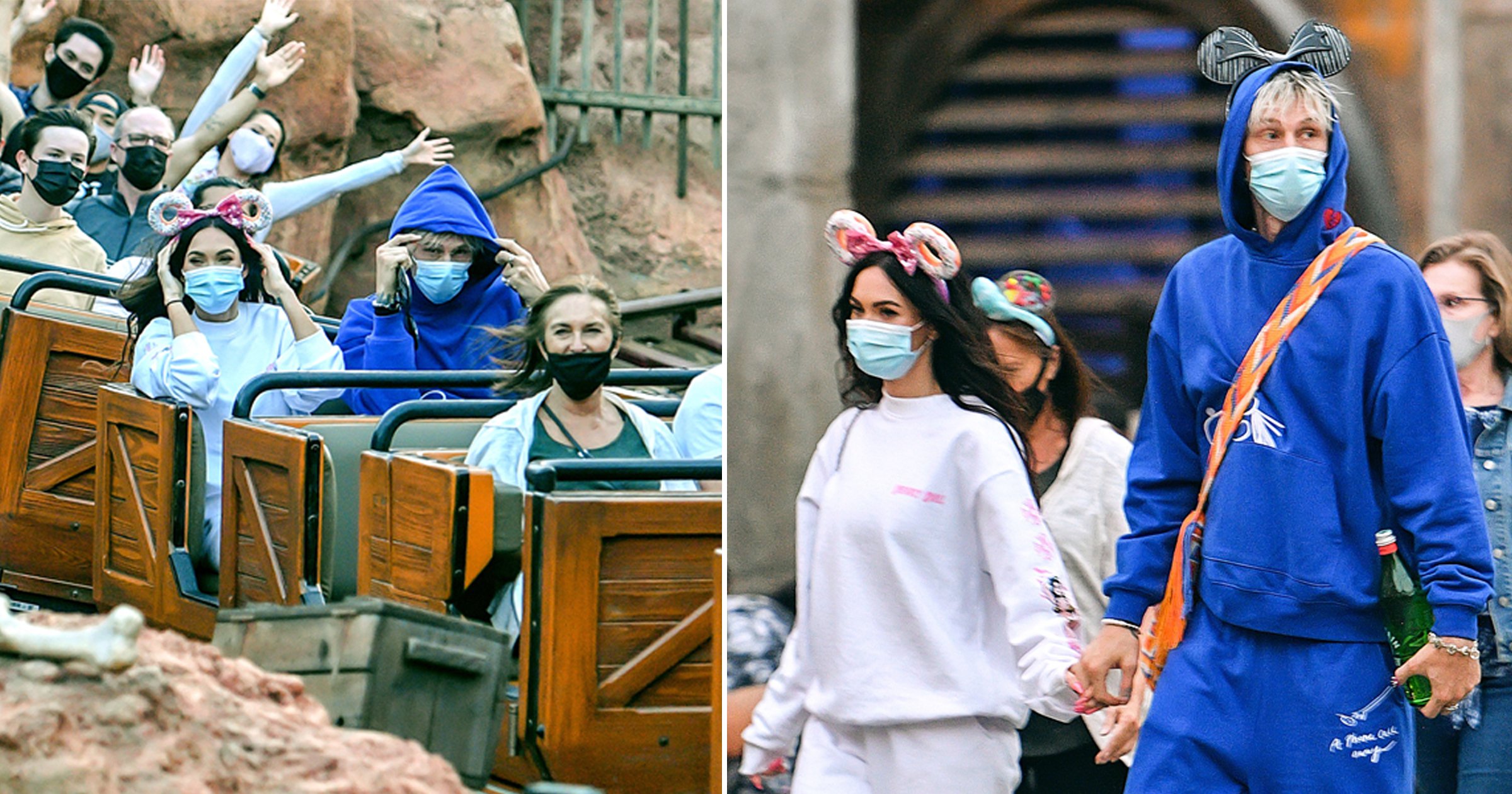 Megan Fox and Machine Gun Kelly enjoyed a day at Disneyland (Picture: Mega)Hollywood’s hottest couple Megan Fox and Machine Gun Kelly took a break from their usual red hot PDA as they enjoyed a fun-filled day out at Disneyland in Anaheim, California on Thursday.
After pulling out all the style stops during several red carpet appearances recently, the actress, 35, and rapper, 31, kept things low-key in oversized tracksuits.
The smitten couple got into the spirit of things as they wore Mickey Ears while enjoying rides such as Thunder Mountain, Railroad Roller Coaster and Rise Of The Resistance in Star Wars Land.
Megan’s parents Gloria and Franklin were also in attendance for the fun-filled day out at the iconic amusement park.
The pair’s Disneyland date was a noticeably more low-key affair, after a few weeks of heating up red carpets with their smoking hot ensembles and passionate PDA.
Just days after locking lips at the Billboard Music Awards last month, they continued to steal the spotlight at the iHeartRadio Music Awards.

The couple got into the spirit of things as they wore Micky Ears while enjoying rides (Picture : MEGA)Megan and MGK met while filming Midnight In The Switchgrass, and days after Megan confirmed her split from husband of 10 years Brian Austin Green, rumours circulated that she had moved on with the rapper that May.
The couple proved how fast they moved as Machine Gun Kelly marked one year since a major relationship milestone last week, tweeting: ‘she said ‘i love you’ one year ago today.’
Over the past year, the pair have professed their love over Instagram and even worn vials of each others’ blood around their necks, and Megan has referred to the star as her ‘twin flame’.
She told Lala Kent and Randall Emmett on their podcast, Give Them Lala…With Randall: ‘I knew right away that he was what I call a twin flame.
‘Instead of a soul mate, a twin flame is actually where a soul has ascended into a high enough level that it can be split into two different bodies at the same time.

The pair have been dating for over a year (Picture / Shutterstock)‘So we’re actually two halves of the same soul, I think. And I said that to him almost immediately, because I felt it right away.
‘I think it was the second day [of filming]. I asked him to come into my trailer for lunch, and I put him through all of this astrology stuff. I went deep right away. I knew before I even did his chart, I said to him, he has a Pisces moon. I could tell by his energy.’
Megan was married to Brian Austin Green from 2010 until their separation in 2020, and they share sons Noah, eight, Bodhi, seven, and Journey, four.
If you’ve got a celebrity story, video or pictures get in touch with the Metro.co.uk entertainment team by emailing us celebtips@metro.co.uk, calling 020 3615 2145 or by visiting our Submit Stuff page – we’d love to hear from you.
For more stories like this, check our entertainment page.
Follow Metro.co.uk Entertainment on Twitter and Facebook for the latest celeb and entertainment updates. You can now also get Metro.co.uk articles sent straight to your device. Sign up for our daily push alerts here.