‘I volunteered at Glasto and ended up dancing with Bradley Cooper’ 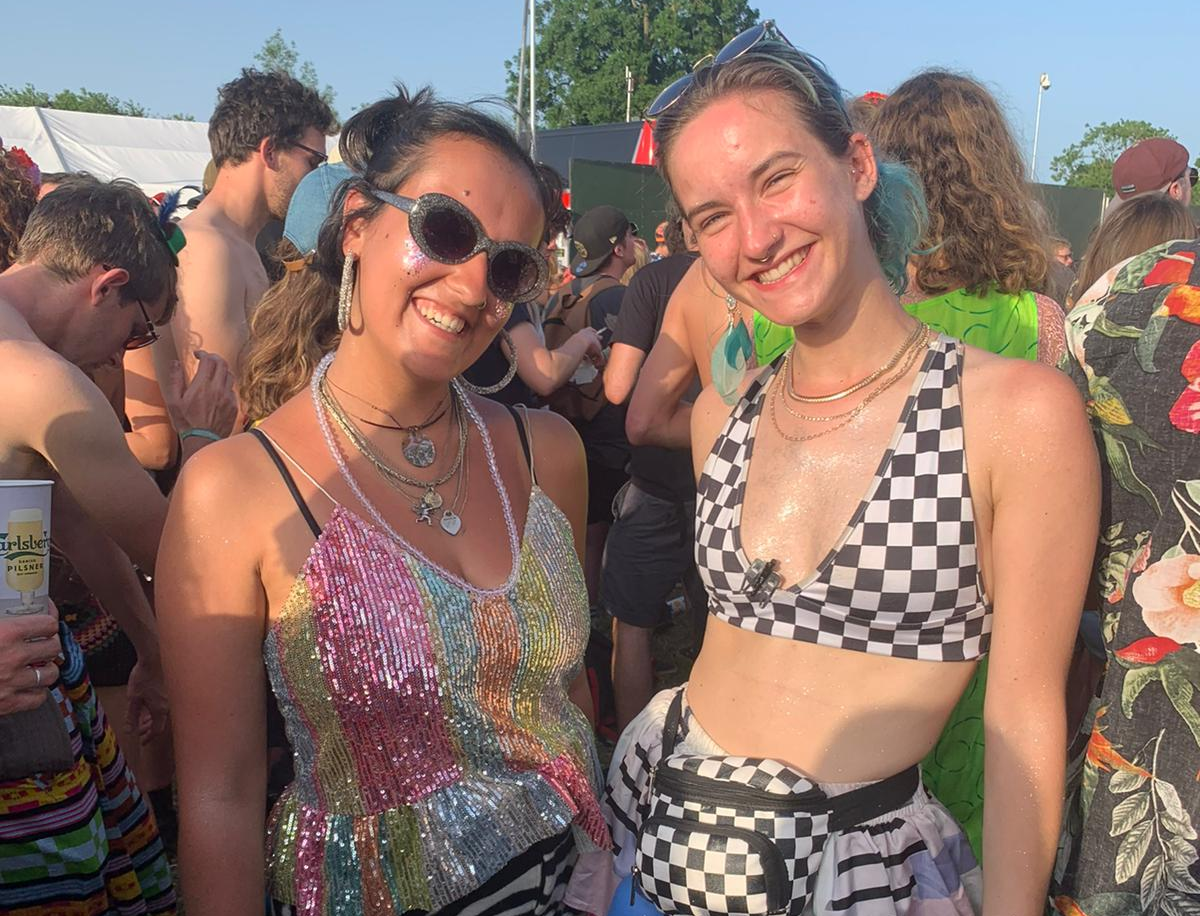 There is no better way to do Glastonbury than signing up as a volunteer, says Metro.co.uk’s Adam Miller (Picture: Adam Miller)Whether you’re hanging out with celebs or dealing with bags of stinking dirty nappies (or worse), there’s no doubt that volunteering at Glastonbury is a very unique experience.
Recalling his time working behind the backstage bar in 2014, Metro.co.uk’s Adam Miller says, ‘At one point I found myself dancing in a Michael Fassbender and Bradley Cooper sandwich.’
Until the pandemic hit, volunteering roles at Glastonbury were plentiful, however, as they also guaranteed free entry to the festival, demand has always been high, with hundreds of people applying each year.
For the lucky ones though, there is no better way to do Glasto at Worthy Farm, according to Adam, who spent six years volunteering at the backstage bar at Silver Hayes – ‘essentially Glastonbury’s dance village’.
‘I have never bought a ticket or even tried,’ he admits. ‘The hours were long and hard work but it was always a tonne of fun meeting the biggest characters – and some pretty incredible celebrities.
‘One night Dermot O’Leary came behind the bar and helped us get drinks out to punters, which was already a highlight in itself – and then in walked Michael Fassbender and his friend who bought us all drinks.’
Admitting he still has the paper cup sat on my shelf at home, Adam continues, ‘Ordering another drink, Michael’s pal came over and said, “Don’t tell anyone but Bradley Cooper is on his way here”.
‘Not only did Bradley rock up and danced his arse off until 3am with us all he brought some more friends too, including the guys from Metallica, who had just come off the Pyramid Stage after headlining that night.’
It was that evening that Adam found himself dancing away with the Hollywood elite. ’I cannot stress how surreal that moment was,’ he laughs.
Hannah Rose also volunteered to do bar work at the festival in 2016 and admits that despite their being a strict ‘no drinking while working rule’, she saw lots of people keen to break it.

Hannah says the volunteers see the best and worst of Glastonbury (Picture: Hannah Rose)‘Each bar has a different vibe and you are always on shift with the same people,’ she explains. ‘I was put with a group of men in their fifties who just wanted a little jolly. They were great, as they’d come out as a group of mates and thought, we’ll have some fun in the bar.
‘Then we also got put with a group of guys in their twenties, but they got absolutely hammered and were rolling around on the floor behind the bar. They were so drunk, they couldn’t even complete the shift. The owners of the bar had to send them back on a bus that very evening – which meant they didn’t get to see any of the festival.’
Hannah says that, unsurprisingly, the bars would get rammed. ‘You’d have a wall of people coming at you just wanting drinks and more drinks,’ she remembers.
‘So many were slurring and couldn’t understand what you’re saying, while some sprawled across the bar trying to get their own drinks.
‘I don’t think I’ve been hit on so many times in my life,’ Hannah adds. ‘It was almost like speed dating – if you like very drunk people! When it was slightly quieter people would stagger in and try to have a really long conversation with you while you’re completely sober, which was annoying at times.’
According to Hannah, it’s the volunteers who truly see the best and worst of Glastonbury.
‘One night back at our campsite, someone did a poo in the showers,’ she recalls.
‘It was the very last night so everyone was packing up their tents and the cleaners had moved in to do the shower block. Everything was getting put away and my tent was really quite close to one of the showers. A cleaner went in, then I heard them shout, “Oh Christ, they’ve done a sh*t in the shower!”
‘They had to come out and take a minute, before going back in with a hose.
‘It was so grim – what type of person does that?’

Hannah says that Damon Albarn’s speech following the results of the EU Referendum was full of emotion (Photo by Harry Durrant/Getty Images)That same year the results of the EU Referendum were announced during Glasto and festival-goers soon discovered that the UK had voted to leave Europe.
Hannah remembers how the decision prompted Blur frontman Damon Albarn to make a speech during his performance on the Pyramid Stage with The Orchestra of Syrian Musicians, saying that ‘democracy has failed us’.
‘He spoke about us leaving the EU and how it was very upsetting and divisive,’ she recalls. ‘It was very moving. He was full of emotion which you could then feel within the audience. People were really upset and the atmosphere was quite sombre.’
‘It absolutely had an impact on the festival that day.’
However, despite the change in mood at Worthy Farm, there was one performance Hannah will never forget.
‘I was on my final shift the night that Adele performed,’ she says. ‘The whole bar emptied so we had an hour and a half of absolutely nothing to do. We all went and got pizza and sat out and watched her over the screen. It was amazing.’
It was the annual struggle to get tickets to Glasto that inspired Jasmine Coulson to sign up as a volunteer one year as a recycling operative.

Jasmine and a friend in their recycling operative gear (Picture: Jasmine Coulson)‘I was so desperate to go,’ she remembers. ‘My role was working in the recycling centre and sorting through rubbish to organise it into appropriate boxes. I had to work six hours a day over four days, but what was great was that we had to do it after the event, meaning we had the entire festival to enjoy ourselves before staying and working the clean up.’
Of course, that doesn’t mean it was totally without drama.
‘On the third day of working I came down with a serious throat infection which was a shame as I had to stop working early,’ explains Jasmine. ‘So, I guess working after the festival was slightly challenging as we were all so run down.
‘Plus, it was always a surprise when it came to sorting the rubbish.
‘The process required us to quickly tear open bin bags with all the unknown contents being thrown onto a conveyer belt. They were some good ones like full crates of beer, but then there were some real shockers, like open dirty nappies.’
Jasmine admits that while the role was worth it, volunteering at Glastonbury Festival was harder work than she expected.

As Jasmine’s volunteer work had to be done after the event it meant they got to enjoy the festival first (Picture: Jasmine Coulson)‘It was intense and required a lot of resilience,’ she says. ‘We had early starts and long hours working with so much rubbish around large pieces of equipment.
‘Volunteering is often deemed to be an easy way in to festivals but I can safely say it was not an easy job. Even so, it was great to see how much respect Michael Eavis and the team had for the environment, not to mention their staff and volunteers. It really adds to the experience and definitely encourages people to come back.’
Adam also agrees that volunteering at Glasto gave him a newfound appreciation for the festival.
‘So much work goes into making sure 100,000 people have the best time of their lives,’ he says. ‘Knowing that you were a part of making that magic happen is invaluable.
More: Adele

‘I genuinely wouldn’t do Glastonbury any other way. While the festival itself is like a city where the only law is to have as much fun as possible, there’s an entire world backstage keeping that operation going which is also a whole other world of fun.
‘It’s like joining a secret society of impassioned festival go’ers who work hard and party harder than anyone else there.
‘So next time you can’t get a ticket? ALWAYS look at volunteering.’

MORE : Meet the man who volunteers to wrestle with sharks to save their lives

MORE : ‘I volunteer to live like a Stone Age woman and make my own arrows’

MORE : ‘I quit my job and ended my marriage to volunteer in Greece with refugees – I helped thousands, met a new love and had a baby’

Volunteers’ Week takes place 1-7 June and highlights the amazing ways people can give back and help others. To get involved click here.