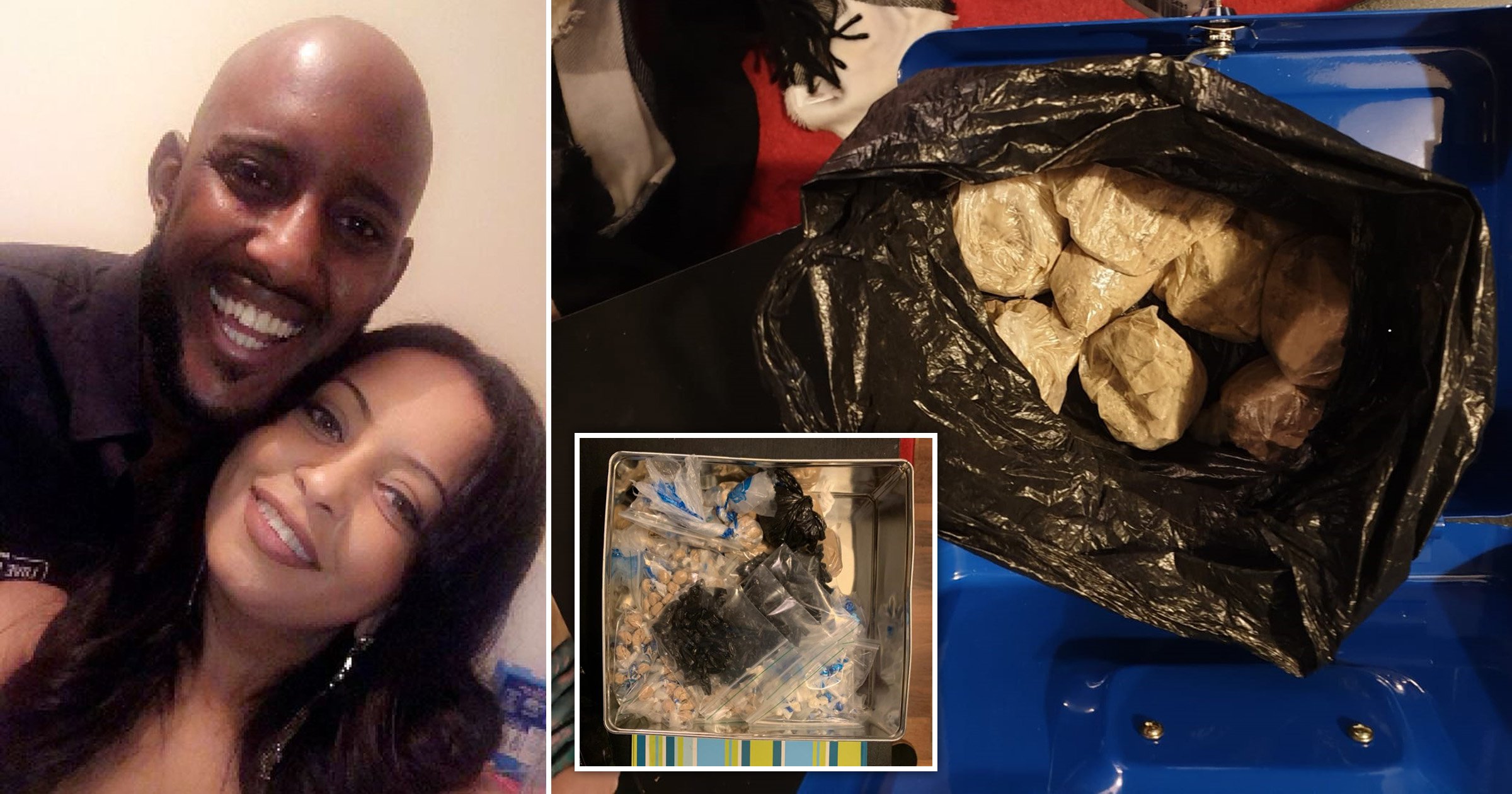 Umi Noor, 37, tried to hide her relationship with 28-year-old drug lord Michael Hassan (Picture: Greater Manchester Police)A nursery worker and mother-of-three who helped her boyfriend traffic heroin and crack cocaine was snared after detectives found a loved-up selfie of the pair, a court has heard.
Umi Noor, 37, kept over £110,000 worth of hard drugs at her home Moss Side, Manchester, where she was raising her children aged 15, 13 and 10.
She used her earnings at a children’s nursery to lease cars which her 28-year-old boyfriend used to distribute the drugs around Bolton, and was setting up a takeaway in the town to launder their drug money.
When officers raided her property in November 2019 and found the stash in her bedroom wardrobe, Noor claimed it was left there by her boyfriend ‘Rico’ and insisted she had no knowledge of it.
But forensics of her phone found pictures of the pair, revealing ‘Rico’ was in fact Hassan, as well as messages indicating they were running the Bolton supply network together.
Receipts found in the house revealed 10 different cars used by Hassan had been rented by Noor to throw detectives off the scent, Manchester Crown Court heard before the couple were jailed this week for a total of 10 years.
Andrew Evans, prosecuting, said: ‘He did not permanently live with her, but stayed for periods of time on a number of occasions.
‘When he did, he used her house to “bag up” and store his drugs, his cash and his “dirty” phones. ‘

Almost 800 wraps of heroin and crack cocaine were found in two locked tins in Noor’s wardrobe (Picture: Cavendish Press)Noor, who was cautioned for allowing a previous boyfriend to grow cannabis in 2015, was also said to have been the first port of call for street dealers who needed to be ‘restocked’ but could not get through to Hassan.
She ‘did not take steps’ to stop her boyfriend and was ‘fully aware of the scale and profitability of the enterprise she was supporting’, Mr Evans added.
In mitigation, defence lawyer Nicola Gatto said her client ‘bitterly regrets’ leaving her life ‘in ruins’ but was a victim of ‘emotional exploitation’ by Hassan.
Noor suffered physical abuse from her father for refusing an arranged marriage at 14 and ended up in debt and tax arrears after divorcing her husband of 10 years.

The nursery worker was jailed for four years and one month this week (Picture: Cavendish Press)

Hassan, who was already locked up for drug offences, was jailed for six years (Picture: Cavendish Press)Ms Gatto said her client ‘accepts that she benefitted to a degree’ but received no help with her debt from Hassan and was ‘trying to extricate herself from a volatile relationship’.
‘She was not ‘cuckooed’ in the strict sense but she admits she turned a blind eye to what was going on.’
Judge Suzanne Goddard QC accepted Noor ‘did not have a lavish lifestyle’ but was ‘far from being forced or pressured into this’.
Noor was jailed for four years and one month after admitting possession with intent to supply and conspiracy to conceal criminal property.
Hassan was jailed for six years after admitting similar offences, and is already serving four years for other drug-related crimes.
Get in touch with our news team by emailing us at webnews@metro.co.uk.
For more stories like this, check our news page.