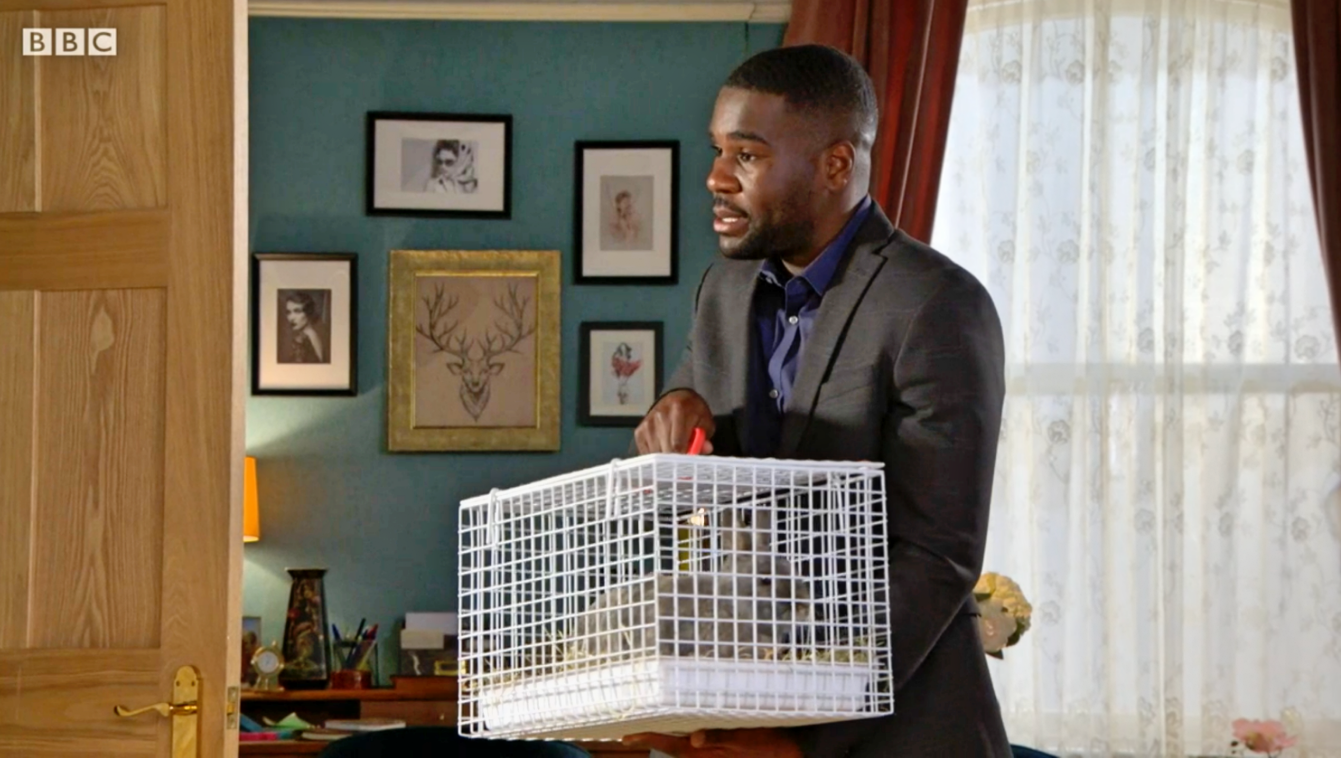 Isaac brought home a rabbit for Arthur in the wake of Kush’s death (Picture: BBC)EastEnders has reportedly been hit with over 200 complaints regarding scenes which saw Isaac Baptiste (Steve Basula) bring home a pet rabbit for Arthur Fowler.
The episode, which aired on June 8, saw Isaac arrive at Martin Fowler (James Bye) and Ruby Allen’s (Louisa Lytton) home with the rabbit in tow.
His intention was to cheer Arthur up in the wake of dad Kush Kazemi’s (Davood Ghadami) death.
‘I read this thing online ages ago, that animals as pets and that help kids deal with grief,’ said the school teacher.
‘It gives them something to take ownership of and gives them some control back.’
Isaac’s girlfriend Lola Pearce (Danielle Harold) was shocked by her beau’s actions, telling him that one cannot simply decide to get another person’s child a rabbit.

Isaac had heard previously that having a pet animal can help children deal with grief (Picture: BBC)Martin, meanwhile, joked that the rabbit, who was named Mr Pickles, ‘would make a lovely stew’ if Arthur didn’t like it.
The Rabbit and Welfare Association Fund voiced their concern on social media following the episode, and shared a link to a complaints form, which they encouraged others to sign.
‘We are getting complaints about the EastEnders story line, featuring a rabbit, the charity wrote on Facebook.
‘Are we happy with this messaging the BBC is now sharing with millions of viewers? Surely all the work of the RWAF is in vain if the BBC is sharing exactly the opposite welfare message but with much greater public access.’

The charity also included a complaint they received, saying that they couldn’t have ‘put it better’ themselves.
‘I watched EastEnders with dismay last night,’ the complaint read. ‘For no particular reason, one of the characters who is a teacher bought a single rabbit as a surprise pet for a child who had not even expressed an interest in getting a rabbit.
More: Danielle Harold

‘The dialogue in the show went on to say that if the child did not want the rabbit, then it at least could be good for eating. The reason for buying the rabbit was explained as that the teacher had heard that rabbits were good for children to learn responsibilities.’
The storyline reportedly received 200 complaints, according to The Sun Online.
Metro.co.uk has reached out to EastEnders for comment.
EastEnders continues Friday June 25 at 8:05pm on BBC One.
If you’ve got a soap or TV story, video or pictures get in touch by emailing us soaps@metro.co.uk – we’d love to hear from you.
Join the community by leaving a comment below and stay updated on all things soaps on our homepage.