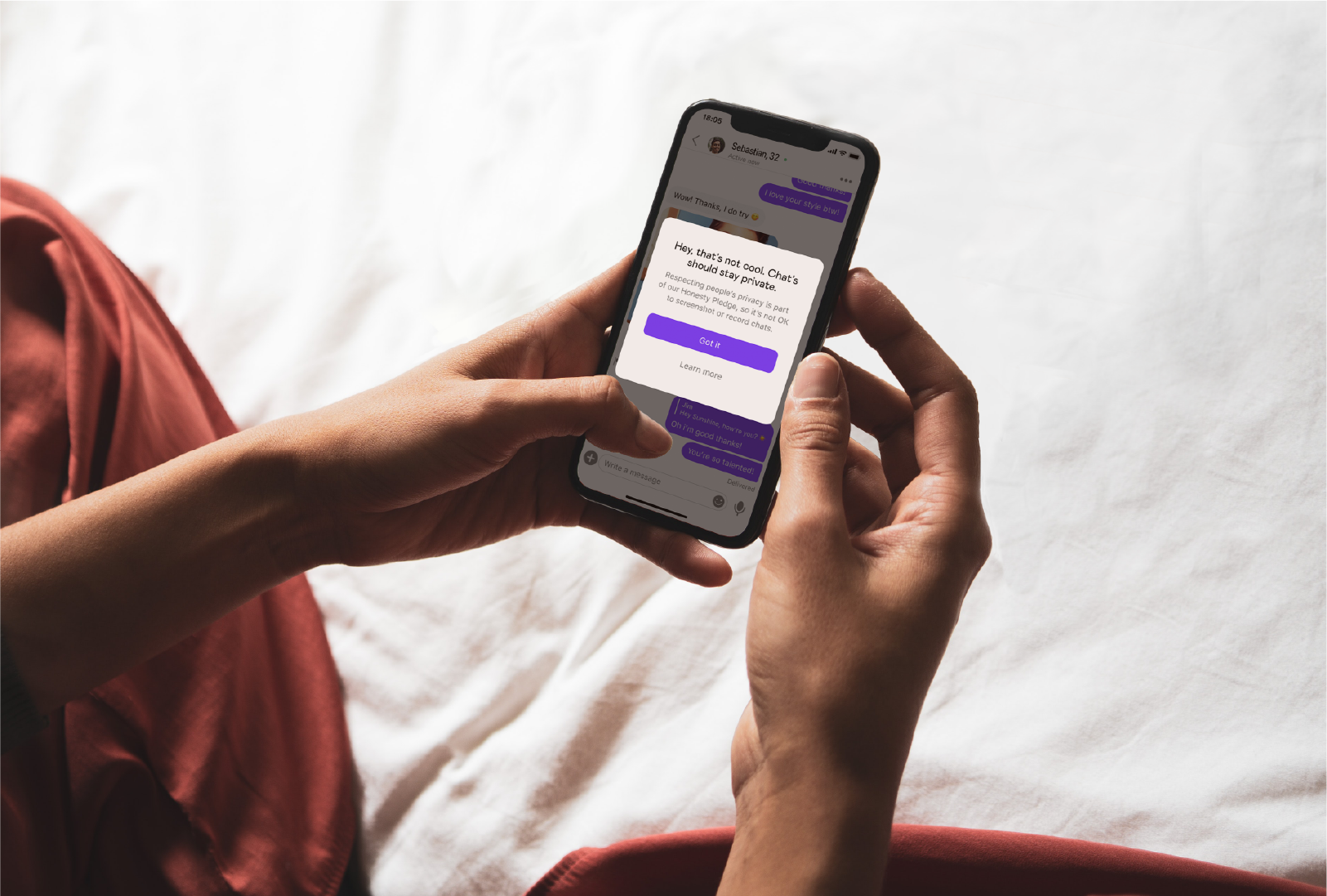 The new screenshot block feature (Picture: Badoo)Sometimes it can feel like you’re talking not just to your dating app match, but their whole group chat too.
It’s easy to snap a screenshot of all your messages and pass them onto your friends to see what they think.
But Badoo says the fear of everything being shared so easily is holding us back when it comes to opening up to potential dates.
To help keep conversations private, the app is launching a screenshot block feature.
Research, carried out by Badoo, found that 93% of daters said they would be more open and honest if they knew easily being able to take snaps of their conversations wasn’t possible.
Over half (57%) said that they worry about their private messages or pictures being shared with other people, with a quarter (24%) revealing they had already experienced private messages or pictures being shared without their permission.
73% also confess they’ve decided against sending images or messages that they’ve wanted to in the past, due to worries of a screenshot being taken.
From now on, users on Android devices will not be able to take or save screenshots or recordings, while on iOS devices, Badoo will show a warning when a screenshot is attempted, discouraging the user from sharing the screenshot more widely.
Badoo claims it also wanted to reduce the possibility of revenge porn by preventing private images from being saved.
Of course, daters should still be careful and think about how well they know their match before sharing more than they are comfortable with.
While snapping a screenshot is the easiest method of keeping a record, determined users may still find other ways to share like using another camera to capture what is on screen or simply just passing it around friends in person.
And if you move out of the app into text or other messaging apps, you won’t have any of the same protections.
Beyond the screenshot block, Badoo recently announced a ban on body shaming, racism, homophobia and hate speech and relaunched its Honesty Pledge, which everyone who joins must sign as a commitment to being part of its honest dating community.
Other recent features introduced on the app to improve safety include profile verification, chat limits and a Private Detector to protect users from receiving unsolicited dick pics, which are also available on Bumble.
Tinder uses its own photo verification feature and offers an in app panic button if you are in danger on a date.
More: Sex

Natasha Briefel, UK Brand Marketing Director at Badoo said: ‘The safety of our users is of the utmost importance to us and we are constantly developing new technology to protect daters on the Badoo platform.
‘This new Screenshot Block feature is yet another way we hope to encourage honesty from our daters, allowing them to chat freely without the worry that their private messages or photos could become public.
‘We know sending that cheeky message or picture is all part of the fun of dating, but we are committed to creating a safe space for daters to have genuine conversations that lead to exciting possibilities.’
Do you have a story to share?
Get in touch by emailing MetroLifestyleTeam@Metro.co.uk.

MORE : Couple in their eighties tie the knot after relatives make them dating app profiles

MORE : Meet the brains behind Thursday, the dating app that only works one day a week

MORE : How I Do It: ‘I’m a dating app co-founder navigating a breakup – here’s a week in my sex life’

Rush Hour Crush – love (well, lust) is all around us

Tell us about your Rush Hour Crush by submitting them here, and you could see your message published on the site.