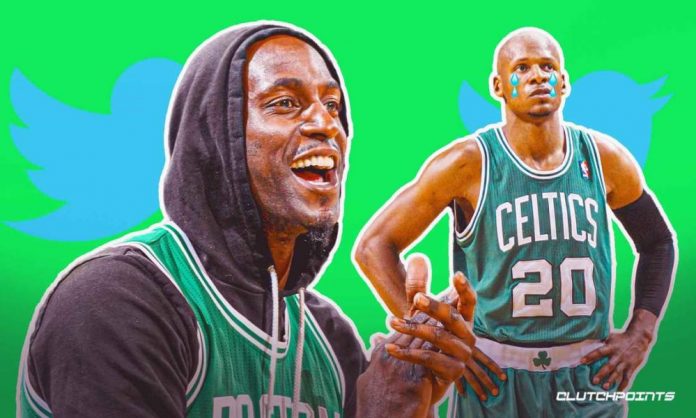 Boston Celtics legend Kevin Garnett was officially enshrined in the Hall of Fame on Saturday, but what made headlines was his interesting speech that didn’t include Ray Allen.

Garnett thanked a lot of people in his speech, even giving a shoutout to Brook Lopez and Joe Johnson. However, it’s clear his beef with Allen is not yet over, as he chose to snub his fellow Hall of Famer despite the huge role the sharpshooter had in helping him win his first and lone NBA title.
Sure enough, Twitter didn’t miss that moment and delivered some high quality reactions to poke fun at the ultimate shade the Celtics icon gave.

Kevin Garnett thanked the Travelers and George’s Music Room in his HOF speech. He also mentioned Ronnie Fields and Paul Piece but not Ray Allen. Even though he was only here for 2 years, he is a definitely a Chi-town legend. Congrats @KevinGarnett5KG!!!
— #2shots #bangbang (@ronwil96) May 15, 2021

lol, KG shouts out Brook Lopez and Joe Johnson in his HOF speech, but not Ray Allen or Rondo.
— Sopan Deb (@SopanDeb) May 15, 2021

Kevin Garnett and Ray Allen have been at odds since the latter chose to sign with the Miami Heat in 2012. After all, Allen declined an offer to return to the Celtics to join a crew led by LeBron James–who were the ones that eliminated Boston in the Eastern Conference Finals in the same year.
To make matters worse for Garnett and the Celtics, Allen helped the Heat win the title in 2013, with his clutch shot in Game 6 of the Finals against the San Antonio Spurs immortalized in Miami and NBA history.
With that said, it’s not really surprising that KG snubbed Allen. Besides, it is also worth noting that he didn’t mention Rajon Rondo in his speech even though they have no beef. The whole situation is funny, and kudos to Garnett for pulling off that shade perfectly.