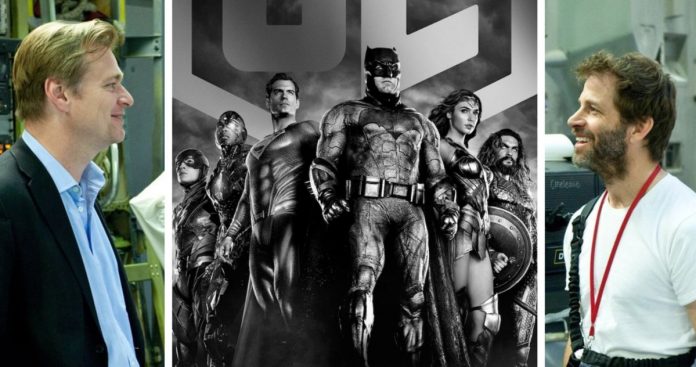 While celebrated filmmaker Christopher Nolan has not made any public statements regarding the three-year-long campaign by fans to #ReleasetheSnyderCut of Justice League, Nolan is good friends with Zack Snyder and has served as an executive producer on all of Snyder’s DCEU movies. In a recent interview with The Telegraph, Snyder confirmed Nolan has seen Zack Snyder’s Justice League and that he considers it a big improvement over the theatrical version of the film.
“Chris has been involved in this thing since Man of Steel, so I think it was as cathartic for him to see it as anybody. We had a long conversation afterwards about how it feels in its four-hour format in the theatre, and he said he thought it had regained its epic sensibility – that mythological aspect that I thought was inherent to the story I was telling all along. Now, I haven’t seen the other version, [the 2017 Whedon Cut], but there is apparently a way to wring the mythological aspects of it. But for me, that’s the single thread that when you pull it out, the whole thing unravels. So we were both very glad to see it stitched back in.”
RELATED: Zack Snyder Claims Warner Bros. Tortured Him Throughout Finishing the Snyder Cut
Zack Snyder’s Justice League is the movie that Snyder had intended to make all along until he was forced to walk away from the project following a personal tragedy, and Joss Whedon was brought on to finish the theatrical cut of Justice League. Now that the “Snyder Cut” is out, fans are starting a new campaign to #RestoretheSnyderVerse, which includes the next two Justice League movies that were supposed to complete Snyder’s stint in the DCEU, and bring the events of Zack Snyder’s Justice League to a conclusion.
Unfortunately for Zack Snyder fans, Warner Bros. appears uninterested in giving any more attention to the SnyderVerse, and the studio has indicated that the Snyder Cut is the last that fans will get to see of the SnyderVerse in the DCEU. In a previous interview, Snyder had reiterated his love for the franchise and his hope that the studio changes its mind regarding his involvement someday.

“I love the characters, and I love the worlds, and I think it’s an amazing place to make a movie. It’s glorious IP. So there’s that. I don’t know what could be done as you go forward other than I think the fan movement is so strong, and the fan community, [their] intention is so pure, and I really have this huge respect for it. I would hope that cooler heads would prevail with [the studio] and they would see that there’s this massive fandom that wants more of that. But who knows what they’ll do?”
Zack Snyder’s Justice League stars Ben Affleck as Batman, Gal Gadot as Wonder Woman, Henry Cavill as Superman, Amy Adams as Lois Lane, Jason Momoa as Aquaman, Ezra Miller as The Flash, Ray Fisher as Cyborg, Jeremy Irons as Alfred Pennyworth, Diane Lane as Martha Kent, Ray Porter as Darkseid, Ciarán Hinds as Steppenwolf, Jesse Eisenberg as Lex Luthor and J.K. Simmons as Commissioner Gordon. The film is now streaming on HBO Max.