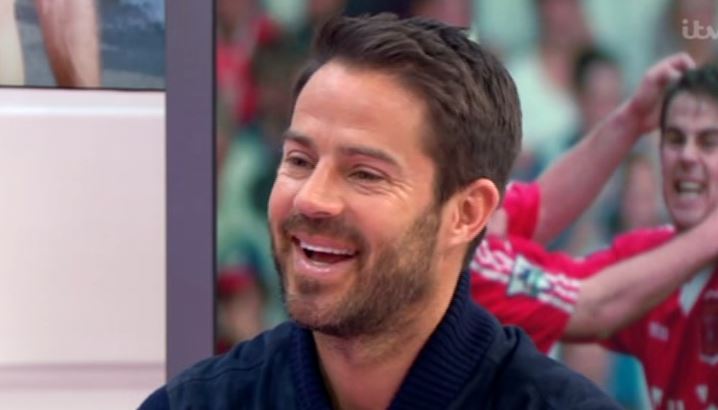 Jamie Redknapp’s set to become a dad again for the third time (Picture: ITV)Jamie Redknapp and his girlfriend Frida Andersson are said to be expecting their first child together, and she now appears to have confirmed the news.
The former footballer has been in a relationship with Frida since August 2020, three years after his split from wife Louise Redknapp.
Now, sources claim Jamie, 47, and Frida, 37, are taking the next step in their relationship by starting a family together.
Hours after the news broke on Sunday evening, Frida began responding to comments on her latest social media post where fans congratulated her.
One wrote: ‘Lovely news on your new baby. Congratulations to you both,’ to which she responded with prayer hand emoji.
She also left the same comment to another follower who said: ‘Congratulations on your new baby.’
It comes after The Sun reported that Frida is three months pregnant and due to give birth in November.

Jamie shares two children with ex-wife Louise Redknapp (Picture: Getty Images)A source told the publication: ‘Jamie and Frida are absolutely delighted. They’ve been virtually inseparable in lockdown, and their relationship has gone from strength to strength.
‘The couple started telling their nearest and dearest last week. Jamie’s been telling pals he’s really excited to be a dad again — less excited about the sleepless nights, and ­nappy-changing.
‘But both he and Frida will be brilliant, hands-on parents.’
Jamie’s parents, Harry and Sandra Redknapp, have reportedly been informed of Frida’s pregnancy and are said to be happy for the couple.
Jamie already shares two children with ex-wife Louise; sons Charley, 16, and Beau, 12.
More: Jamie Redknapp

The retired Liverpool player was married to the former Eternal singer for 19 years until their split in 2017.
Metro.co.uk has reached out to Jamie Redknapp’s reps for comment.

MORE : Jamie Redknapp and girlfriend Frida Andersson make the most of London sunshine for coffee date