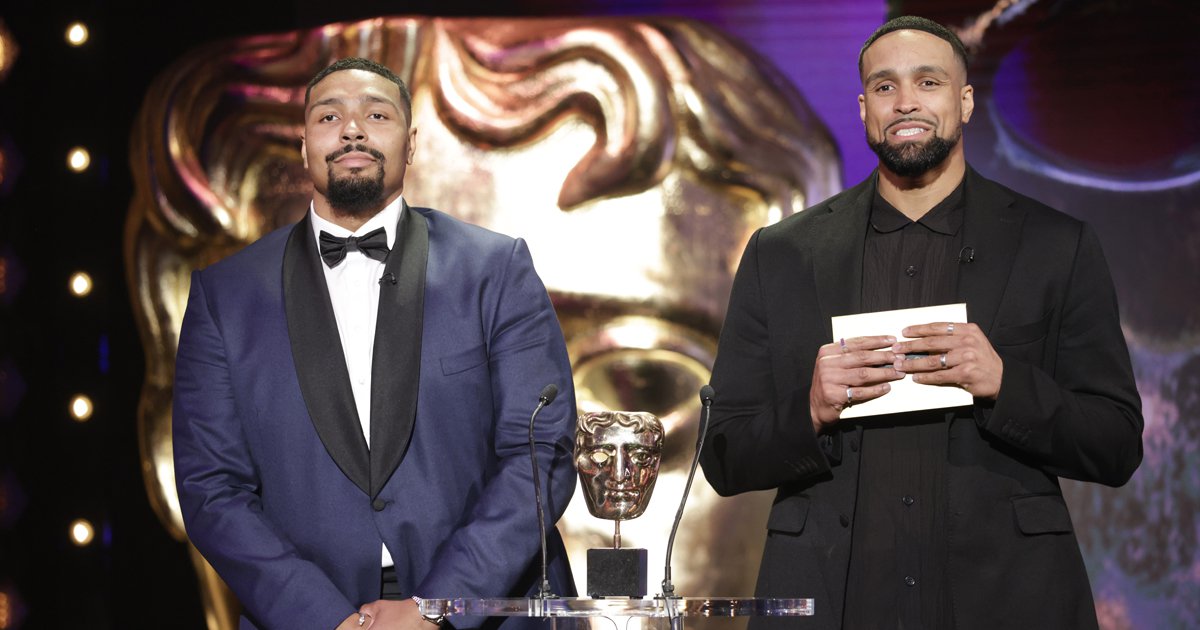 Jordan and Ashley Banjo referenced their BLM-inspired routine while presenting an award (Picture: Rex)Ashley Banjo made reference to the complaints about Diversity’s powerful Black Lives Matter-inspired dance routine on Britain’s Got Talent at the Baftas.
The dancer and choreographer, 32, made reference to the 31,000 complaints the performance received as he and brother Jordan Banjo arrived to present an award at the Bafta TV Awards.
As the pair took to the stage to announce the nominees for the award for best feature, Ashley began: ‘So, it’s lovely to be invited here tonight to present a Bafta and to be joined by the nominees all having a little party back at home.’
Jordan then added: ‘It makes a lovely change to be stood here, suited and booted, not sweating in rehearsal being shouted at by this guy, being moaned at by this guy, being told what to do…’
Ashley then quipped: ‘Thank you Jord, stop complaining – I’ve had enough of that for the past year, thank you.’
The performance took place in September 2020 and was inspired by the events of the past 12 months, including the protests against police brutality sparked by the death of George Floyd.

The routine drew 31,000 Ofcom complaints and the Ashley himself was subject to horrific racist abuse online.
Earlier in the week, he revealed that he hoped the performance would inspire his own children to ‘do what’s right’ regardless of the backlash.
He told the Loose Women panel earlier in the week: ‘I was just interested in saying what was on my heart and what was going on at the time.
More: Baftas

‘I would be absolutely over the moon to win this one, but it’s the one moment where an award won’t define the moment for me.
‘It was about standing up for what was right and going through the storm. I want to use that moment and teach my kids to do what’s right.’
If you’ve got a celebrity story, video or pictures get in touch with the Metro.co.uk entertainment team by emailing us celebtips@metro.co.uk, calling 020 3615 2145 or by visiting our Submit Stuff page – we’d love to hear from you.
For more stories like this, check our entertainment page.
Follow Metro.co.uk Entertainment on Twitter and Facebook for the latest celeb and entertainment updates. You can now also get Metro.co.uk articles sent straight to your device. Sign up for our daily push alerts here.