HomeGamingVon Miller still has gas left in the tank
GamingHealthPoliticsScienceSports

Von Miller still has gas left in the tank 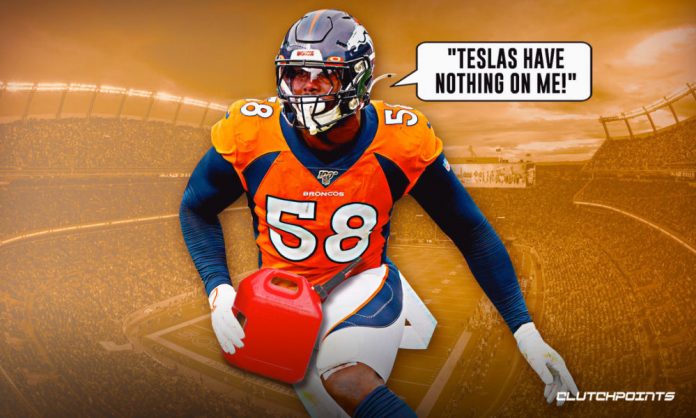 Not exactly a young whippersnapper anymore, Denver Broncos superstar Von Miller will enter the season with a ton of questions attached to his name. Some more nefarious than others.

Luckily for the veteran, Miller appears to have support in all the right places, including from the likes of Broncos head coach Vic Fangio.
“It’s going to be up to him to put in the time and effort in the next few months to get his body right,” Broncos coach Vic Fangio said about Von Miller. “As we saw yesterday in golf, Mickelson proved you can play great, but the one thing he did mention was he’s had to work harder and be more committed to his game to achieve that. I think that applies to football players, too — even somebody as talented as Von. You need to do more to maintain that level of play once you start getting into your 30s like he is and playing the position he is. There’s no doubt in mind that he can do it. He’s just got to do it himself.”
Miller, who isn’t exactly modest when it comes to his abilities on the gridiron, did say he’s still “beating everybody’s ass,” which is not a visual I need right now.
Defense is rarely the issue for the Denver Broncos. Assuming Von Miller and company continues to play well, especially now that they have roughly two billion good defensive backs, it’ll be up to Vic Fangio to figure out the quarterback situation, especially after passing on numerous gunslingers in the 2021 NFL Draft.