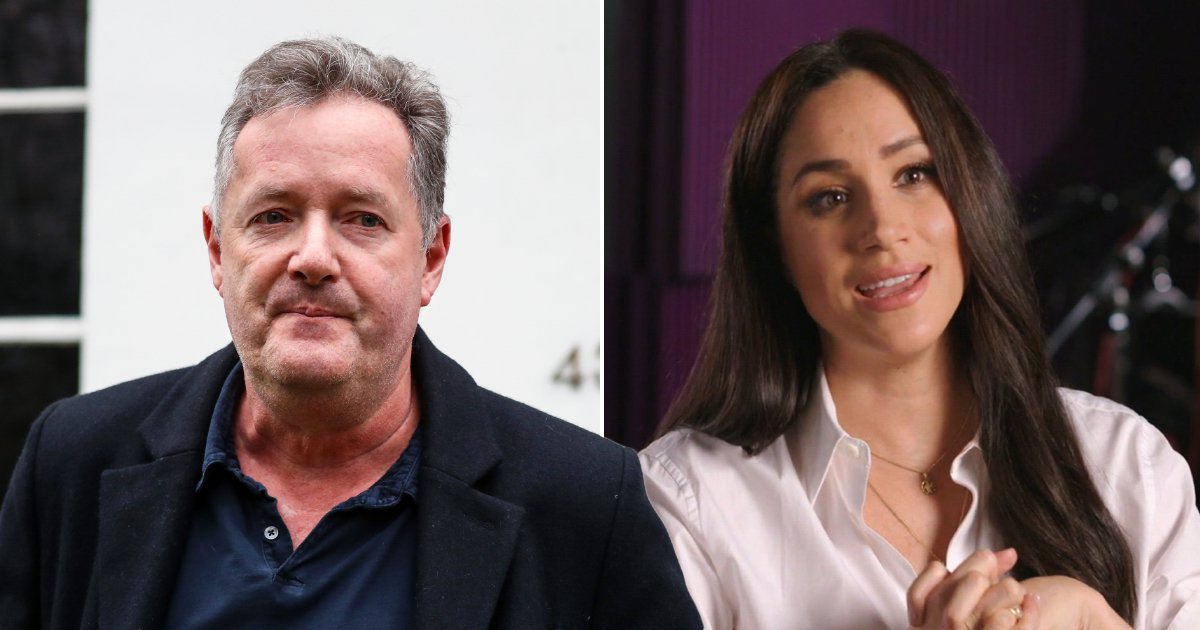 Piers has lashed out at Meghan, again (Picture:
Getty)Piers Morgan has accused Meghan Markle of ‘gargantuan hypocrisy’ following the announcement of her new children’s book.
It was confirmed on Tuesday that the Duchess of Sussex has written a children’s book, The Bench, inspired by her husband Prince Harry and their son Archie, looking a father-son relationship through the eyes of a mother.
With the book set to celebrate ‘the warmth, joy and comfort of the relationship between fathers and sons from all walks of life’, Meghan said: ‘This representation was particularly important to me … and I worked closely to depict this special bond through an inclusive lens. My hope is that The Bench resonates with every family, no matter the make-up, as much as it does with mine.’
Piers – who left Good Morning Britain following the fallout over his comments about Meghan and Harry’s interview with Oprah Winfrey – lashed out over the announcement, claiming the Duchess ‘ruthlessly disowned’ her own father Thomas Markle.
In his column for the MailOnline, the 56-year-old wrote: ’The whole notion of Meghan Markle dishing out advice to anyone about the relationship between fathers and children is absolutely ridiculous given the appalling relationships she and her husband have with their own fathers.
‘Yet her brazen decision to do it anyway is so sadly typical of a woman whose tendency for staggering hypocrisy is only matched by her extraordinary tone-deafness.
‘If she really cared about father-child relationships, she’d take a chauffeur-driven limousine on the hour-long trip to see her own father who’s never even met either Harry or Archie.

The Bench is about father-son relationships (Picture: PA)‘And if she really cared about father-child relationships, she would never have trashed Harry’s family on global TV in the horrible way that she did, causing yet more damage, possibly irreparably, to Harry’s relationship with his father.’
The journalist claimed that Harry sounded like a ‘needy spoiled brat teenager’ in the Oprah Winfrey interview, and accused him of ‘ditching his family, country and duty because his chillingly controlling and ambitious wife wanted him to’.
Piers also accused Meghan of ‘cynically exploit[ing] her royal titles because she knows that’s the only reason anyone is paying her vast sums of money to spew her uniquely unctuous brand of pious hectoring gibberish in Netflix documentaries, Spotify podcasts or children’s books’, after Meghan’s title, the Duchess of Sussex, was used on the book cover.
Piers was previously a fan of Meghan, having met the Suits actress before she was engaged to Prince Harry, but has since become one of her biggest critics.

Piers accused Meghan of trashing Harry’s family (Picture: Getty/CBS/Harpo)Earlier this year, his comments on GMB resulted in 41,000 Ofcom complaints, after he suggested he didn’t believe Meghan when she said she was denied help from the palace while experiencing suicidal thoughts.
The resulting backlash led to Piers quitting GMB, although he did not back down on his comments.
A formal complaint was lodged on behalf of Meghan with ITV and Ofcom, although she has not spoken out against any of Piers’ criticisms of her in the past.
While Piers wasn’t impressed with Meghan’s new venture, his former GMB colleagues praised the book on this morning’s show.
More: Meghan Markle Duchess of Sussex

Adil Ray said: ‘I think it’s great, it’s fantastic. It’s a great story. A great idea about the father and son relationship. Often when we think about children’s books we think about the mother and daughter in these times is quite interesting.
‘I think it’s clearly going to be personal because it’ll be her relationship with her own son and Harry. I think it’s fantastic, it’s positive. It’s a great thing and I hope it does very well. What’s more to say about it, why would you knock it? Why would anybody knock it?’
Susanna Reid agreed and weighed in: ‘Absolutely right.’
The Bench will be published on June 8.