I almost terminated my pregnancy due to severe vomiting and nausea 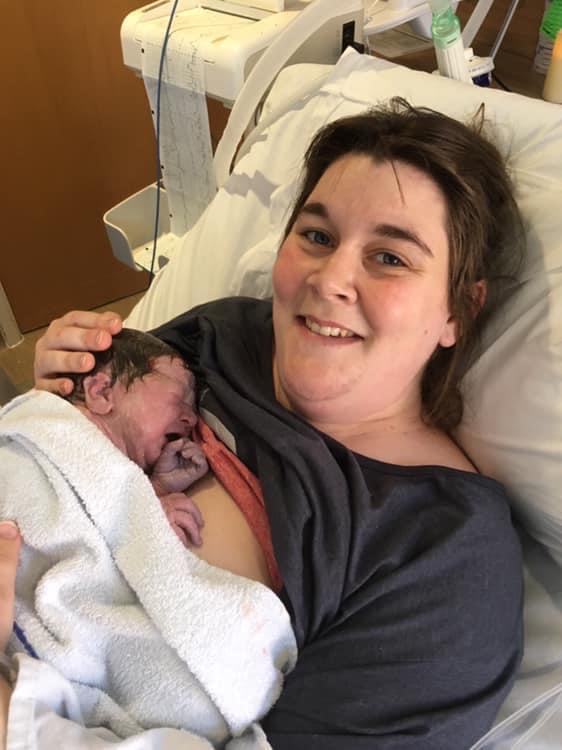 Around 13 weeks, I experienced severe pains (Picture: Jess Lowe)The moment I considered terminating my pregnancy was one the lowest of my life.
I wanted my baby but I was 12 weeks pregnant with my third child and had been suffering with Hyperemesis Gravidarum (HG) – a complication in pregnancy characterised by severe nausea, vomiting, weight loss and dehydration – almost since the start of the pregnancy.
In 2017, I’d spent nearly three months bed-bound, unable to do anything but throw up and sleep. It was hard to even hug my children as I couldn’t stand their smell. I also couldn’t face going into the kitchen because any thoughts of food made me sick.
I was lucky that my doctor understood it wasn’t just morning sickness, but the medication he’d given wasn’t working. I’d had enough; I’d reached breaking point and my thoughts turned to termination.
I was devastated but felt like the baby was killing me and that I had to make a choice.
Unfortunately, the sad reality of HG is that many women will feel like they’re going through it alone – that’s why we need to speak up about our experiences.
Around 13 weeks, I experienced severe pains and thought I was having a miscarriage. Once at the hospital, tests showed I had a UTI; the baby was fine, and I was relieved. While there, I was prescribed another antiemetic, Metoclopramide, in addition to my existing trio of medication, Prochlorperazine, Cyclizine and Ondansetron.
These medications are used to treat and prevent nausea, vomiting and sometimes dizziness. Usually Ondansetron is used for the treatment of vomiting and nausea caused by cancer chemotherapy and radiation therapy.

When I had my first baby at 26, I had never heard of HG (Picture: Jess Lowe)The effect was instantaneous: we had finally found the combination that worked for me. I was sent home full of hope. I was so thankful to have not gone through with the termination.
I needed these four medications around the clock, setting my alarm at 2am and 4am to take my tablets otherwise I would feel horrendous. They slowed the sickness down but didn’t stop it completely; I was still sick up to 10 times a day.
Hyperemesis Gravidarum is more severe than morning sickness and, though the symptoms may get better after week 20 of pregnancy, for many women it lasts the duration.
I suffered all the way through in all three of my pregnancies. I didn’t gain much weight because of the vomiting and struggled to keep water down so I was always anxious about the baby’s health.
When I had my first baby at 26, I had never heard of HG. I was very sick but continued working full-time as I thought what I was experiencing was normal. No one ever mentioned HG to me, not even my midwife when I questioned her.
It was very difficult: I was sick all the time – day and night – I couldn’t drink, and barely ate. I suffered headaches from dehydration, anxiety, and depression. I was terrified; I was becoming a first-time mum and felt helpless.
With my second pregnancy, I didn’t think I would suffer as much. But I was wrong, it was worse.
I was diagnosed with HG 13 weeks into my pregnancy and given Prochlorperazine and Cyclizine, which took the edge off, but I was too scared to ask for more help for fear of not being believed. It felt good to have a diagnosis but I also felt that it had taken too long to get the help I needed.
I was housebound for months, the only time I went anywhere was for hydration therapy, which was at the hospital. This is a simple treatment that delivers fluids directly into your bloodstream through a small IV inserted into your arm. It was incredibly difficult to care for my daughter while being pregnant.

I didn’t need a test to know I was pregnant (Picture: Jess Lowe)Five years later, we tried for our third baby. We were both very apprehensive about trying for another child but we really wanted to add to our family. It took a lot of effort to overcome the fear of HG happening again.
This pregnancy was by far the worst. I visited my GP before even becoming pregnant, to make sure he was aware of what could happen and got a promise of the help I would need.
I didn’t need a test to know I was pregnant. I was unwell for two weeks, struggling to eat or drink, and was very nauseous. A few days later I was bed-bound again, only leaving to go to hospital for hydration therapy.
This helped, but a vicious circle of trying to drink, vomiting, becoming dehydrated and going back to hospital every few days would start over. The isolation was horrific; my husband took care of the children, taking them to school before work.
I was alone all day, in bed with no one to talk to for months, and only a sick bowl for company. I’ll never forget it; it was the worst time of my life. After I was prescribed Metopclopramide, I was able to slowly leave my bed and do more during the day. It took weeks to get any of my strength back.
At 37 weeks, a consultant recommended I be induced due to very low levels of amniotic fluid around the baby, caused by my dehydration. I was relieved by the suggestion because I just couldn’t take the sickness anymore.
HG symptoms are supposed to disappear once the placenta has been delivered. Unfortunately, I was still regularly sick until a fortnight later.
I’d felt sick after my first two births but hadn’t actually thrown up. This time I was violently sick.

See also  Sharon Osbourne Says Prince Harry Is ‘The Poster Boy For White Privilege’ After Her Racist Scandal And Firing!

It’s thought that around one to three in every 100 women gets HG (Picture: Jess Lowe)This affected my long-term recovery; I couldn’t believe that I’d spent almost nine months vomiting nearly 20 times a day and it was still happening.
My mental health was affected, I became anxious, terrified of everything, with feelings of dread every morning. I started to feel like it would be better if I wasn’t here, so the pain would go away.
Luckily, I sought help and my GP gave me anti-anxiety medication and I slowly recovered. But the waves of anxiety have never gone completely, even three years later. These days I find I can use breathing techniques and talk it over, either with my counsellor or my family.
A side-effect of my HG was a hiatus hernia in my chest, from the constant vomiting. This means I have been on additional medication too, to combat the reflux. Thankfully, the hernia has now been repaired, but it’s scary to think about what this condition in pregnancy can do to your body.
One way I found out about HG was through the charity Pregnancy Sickness Support (PSS). Passionate about raising awareness, they help women suffering to know that they aren’t alone, that HG is different to morning sickness, and support is available.
Their work is incredible: the help I got was invaluable and I am now paying it forward by volunteering with them myself.
PSS provide a peer supporter who has experienced HG themselves for your whole pregnancy to give advice and support when it’s needed most. They advocate for women who are too weakened to fight for themselves.
It’s thought that around one to three in every 100 women gets HG but the exact figure isn’t known as some cases may go unreported, according to the NHS website.

I am currently contemplating my fourth baby (Picture: Jess Lowe)Not everyone gets the help I got. Awareness and understanding of HG is severely lacking among some professionals, despite official recommendations from the Royal College of Obstetricians and Gynaecologists.
These recommendations include guidelines for diagnosis and monitoring of HG and for their severity to be assessed, as well as combinations of different medications that should be used.
Until this changes, women are still being told to ‘think positive’, ‘try eating/drinking ginger’ or that ‘being sick is a healthy sign’.
More: News

Ginger is banned from my house – research has shown that it doesn’t necessarily help with sickness for women with HG, can cause unpleasant side effects and being constantly told to try it can make you feel like you’re not being taken seriously.
Women will not go through with wanted pregnancies, because of the debilitating symptoms, if they don’t get the help they need.
I am currently contemplating my fourth baby and I can only hope that with support from my GP and PSS, I can manage the symptoms of HG and have a healthier, happier pregnancy this time around.
Saturday 15 May is Hyperemesis Gravidarum Awareness Day and Pregnancy Sickness Support is encouraging women to share their #HGTruths.
For more information about the work PSS does, visit their website here or call the information line on 024 7638 2020.
Do you have a story you’d like to share? Get in touch by emailing James.Besanvalle@metro.co.uk.
Share your views in the comments below.

MORE : Extreme morning sickness made me feel like I was dying – a pill to treat it is what women deserve

MORE : ‘We are dying and we don’t feel safe’: Why pregnant women need more protection during the pandemic