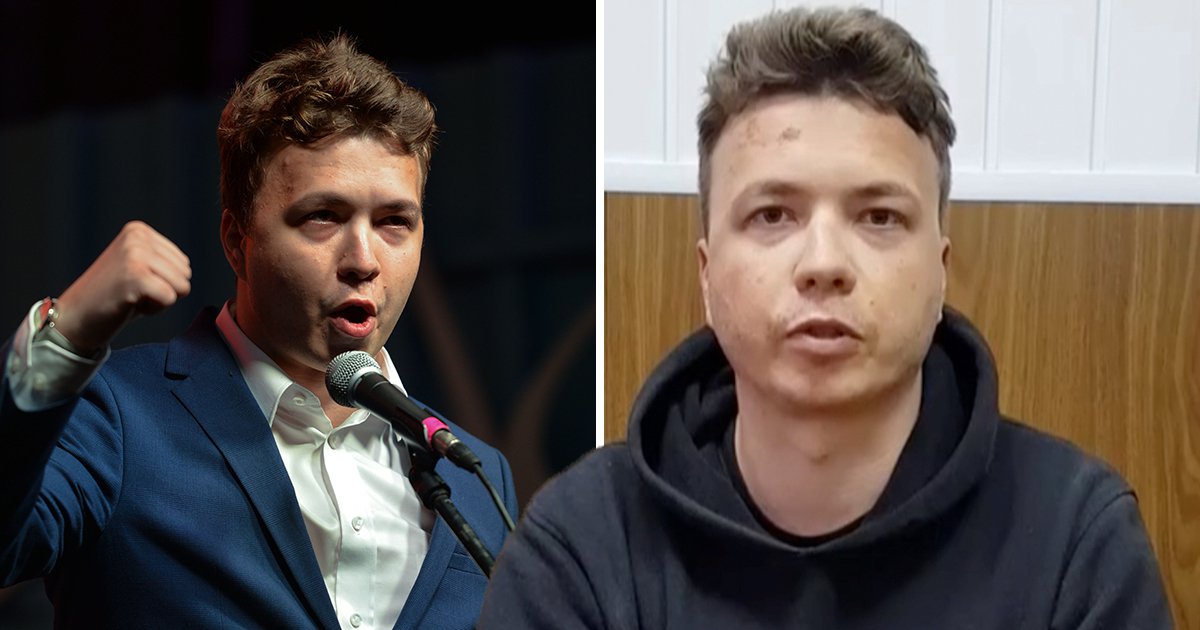 A journalist arrested by the Belarusian regime after a plane was ‘hijacked’ has appeared on state TV to ‘confess’ to organising mass protests – but his supporters claim he is being tortured.
Roman Protasevich, 26, and girlfriend Sophia Sapega, 23, were detained on a Ryanair flight from Athens to Vilnius after it was forced to divert to Minsk following a purported ‘bomb scare’ on Sunday.
The young man, who faces charges that carry the death penalty, denied reports he had been hospitalised with a heart condition in new footage.
He said: ‘I am in Detention Centre No1 in Minsk. I can say that I have no health problems, including with my heart or any other organs.
‘I’m being treated with respect and according to the law. Right now, I continue to cooperate with police and confess to organising mass protests in Minsk.’
Mr Protasevich appeared to have a dark mark on his forehead, and was wearing a black hoodie as he sat behind a table with a pack of cigarettes next to him.
His dad Dzmitry Protasevich claims he was forced to record the video and has accused authorities of beating his son.
Speaking to Sky News, he said: ‘It’s not his words, it’s not his intonation of speech, he is acting very reserved and you can see he is nervous.
‘It is very likely that his nose is broken, because the shape of it is changed and there’s much powder on the front of it, all of the left side of his face has powder, there’s some greasy stuff on the left side.

The journalist was dragged off a Ryanair plane with his Russian girlfriend (Picture: Artur Widak/NurPhoto/Shutterstock)‘And it’s not his pack of cigarettes on the table – he doesn’t smoke these. So I think he was likely made to do that.’
The father added that his son ‘cannot admit to creating the mass disorders, because he just didn’t do any such thing’.
Exiled opposition leader Svetlana Tikhanovskaya also says the ‘admission’ was produced under ‘physical and moral pressure’.
She said: ‘We’re really afraid, not only for his freedom but for his life.’
Meanwhile, US President Joe Biden said both the video, which was ‘made under duress’, and the forced flight diversion were ‘shameful assaults on both political dissent and the freedom of the press’.
More: Crime news

It comes after the UK Government ordered the Civil Aviation Authority to request airlines avoid Belarusian air space ‘to keep passengers safe’.
Transport Secretary Grant Shapps has also suspended the operating permit for Belavia, the country’s state-owned airline.
The European Union joined the UK in new sanctions against Belarus last night with the 27 members states agreeing to ban Belarusian airlines from EU airspace and airports, and recommending EU airlines do not fly to the country.
Foreign Secretary Dominic Raab said it’s ‘very difficult to believe’ Mr Protasevich’s arrest could have taken place ‘without at least the acquiescence of the authorities in Moscow’.
Asked why he believed this, he replied: ‘Based on all the circumstances. But we don’t know – it is just the proximity of the relationship between Minsk and Moscow.’
Ryanair boss Michael O’Leary has named the incident a ‘state-sponsored hijacking’ and claims agents from Russia’s KGB were on board the flight.
Get in touch with our news team by emailing us at webnews@metro.co.uk.
For more stories like this, check our news page.