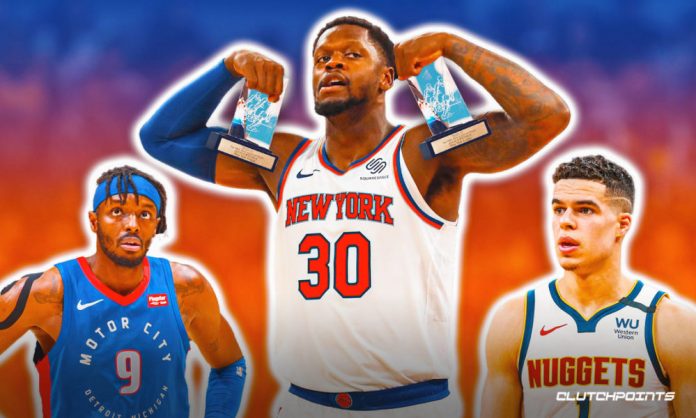 New York Knicks forward Julius Randle just won the 2020-21 season Most Improved Player of the Year award, but he has bold aspirations after getting a taste of it.

On Tuesday after being named the recipient of the award, Randle was asked about the possibility of him winning the award again next season–something which no one has ever done before. In true Randle fashion, the one-time All-Star answered with full confidence and shared that he doesn’t see any reason why he can’t win it again.

“Why can’t I be the most improved player next year again?” – Julius Randle pic.twitter.com/dTsJqhVKbi
— Knicks Videos (@sny_knicks) May 26, 2021

Julius Randle has undoubtedly been phenomenal for the Knicks throughout the 2020-21 campaign, and he was the biggest reason why New York finished as the fourth seed in the Eastern Conference after a seven-year playoff drought.
Of course credit should be given to head coach Tom Thibodeau for bringing a winning culture to the team, but without Randle, it’s doubtful if they would be able to reach the same heights they did this year.
For what it’s worth, it might look an impossible feat for Randle to repeat as Most Improved Player of the Year. After all, All-Stars often get snubbed for the award and there isn’t much narrative for him unlike the feel-good story the Knicks had this season.
He is not without a chance, but he might need to do more if he really wants it. After averaging 24.1 points this 2020-21, he might need to average 30-plus points and more assists and rebounds. Should he be able to also lead the ‘Bockers to the top of the East, it could be enough reason for him to repeat.

See also  The medical care provision system is in crisis