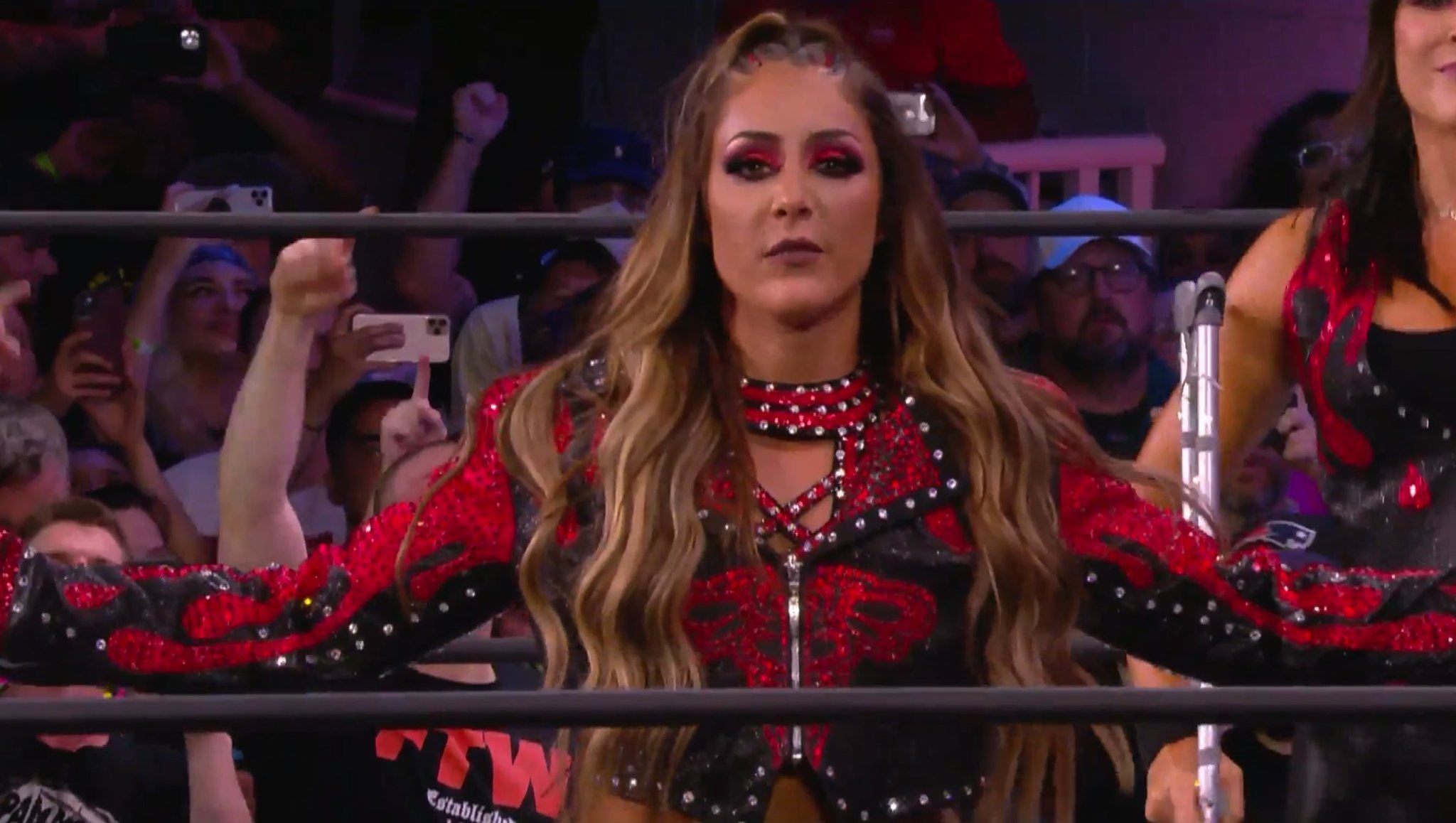 The star of the night (Photo: AEW)AEW Double or Nothing delivered a cracking show as live wrestling fans returned to pay-per-view for the first time in over a year.
From big surprises like Mark Henry’s debut and Lio Rush appearing in the Casino Battle Royale to Britt Baker’s emotional title win and Kenny Omega retaining his belt collection, there were plenty of big moments to savour.
In a cracking opening match – which was boosted by a hot crowd – Hangman Page picked up a win over Brian Cage, with the hulking star refused help from Team Taz.
The distraction played into the ending, with the bout itself getting things rolling on the right note as they rowed after the bell and Cage stormed out, building the tension among the ranks.
The AEW World Tag Team Title match kept things rolling with some fun action and decent drama with Jon Moxley and Eddie Kingston coming close.
The interference from the Elite was well-timed even if the closing stretch with Young Bucks being Young Bucks – personal opinion means the mileage will very here – with the superkick party was a somewhat flat ending.
Paul Wight came out to a good pop to announce the Casino Battle Royale, with Lio Rush providing a very nice surprise as the Joker – and he’d be a fine addition to the roster.
The match was better than most Battle Royales, and Jungle Boy getting the win the crowd singing his song was a genuinely great moment.
Christian Cage would have been a worthy winner too, and Jungle Boy gained a tonne from overcoming a veteran here with a sign of respect after the match.
Anthony Ogogo made his debut in a fantastic clash against Cody Rhodes, which was much better than the build deserved.
The Guv’nor looked like a natural in his first real test as a wrestler, but the ending – while spectacular as Ogogo took a Vertebreaker – was disappointing with the American Dream picking up the win.
Miro retained the TNT Title in a good sprint of a bout with Lance Archer, and this was a solid showcase for the champ.
Dr. Britt Baker, D.M.D. arrived in a big way in the next match, delivering an great match with Hikaru Shida and defeating the long-running champ to win the AEW Women’s Title.
The two stars delivered in a huge way, Baker got the win she deserved and Shida has enough of an excuse for the loss.
The roar from the crowd was everything the new champ has earned with her work over the past few months, and the moment she shared with Tony Schiavone on the stage was genuinely touching.
Sting rolled back the years with a great performance as he and Darby Allin picked up a win over Scorpio Sky and Ethan Page.
All four men did a wonderful job here, and Darby helped out as he flew around the ring and ringside area, including Page launching him over the top rope into the front row.
Kenny Omega retained in a match that really gathered pace as it went on and made a star out of Orange Cassidy, with some brilliant nearfalls suggested he or PAC could actually walk away with the AEW World Title.
In the end, the belt collector stole a win with a fluke roll-up on OC after laying out their opponent with every championship.
More: WWE

The main event was a match of two halves, with the Inner Circle and The Pinnacle in a tough spot having to follow the brutality of Blood and Guts.
The initial pre-taped segment was hit and miss, although the Sammy Guervara was an absolute star and Konnan’s cameo with a New Jack tribute was a very nice touch.
Once the action hit the ring, things really picked up and crowd responded in kind, and the sound of the sold-out Daily’s Place belting out Judas was a fitting way to end the show.

AEW Double or Nothing results and grades

Stadium Stampede: The Inner Circle beat The Pinnacle (B-)

If you’ve got a celebrity story, video or pictures get in touch with the Metro.co.uk entertainment team by emailing us celebtips@metro.co.uk, calling 020 3615 2145 or by visiting our Submit Stuff page – we’d love to hear from you.
For more stories like this, check our entertainment page.
Follow Metro.co.uk Entertainment on Twitter and Facebook for the latest celeb and entertainment updates. You can now also get Metro.co.uk articles sent straight to your device. Sign up for our daily push alerts here.

See also  Is Warner Bros. Really Phasing Out DVDs and Blu-Rays Next Year?