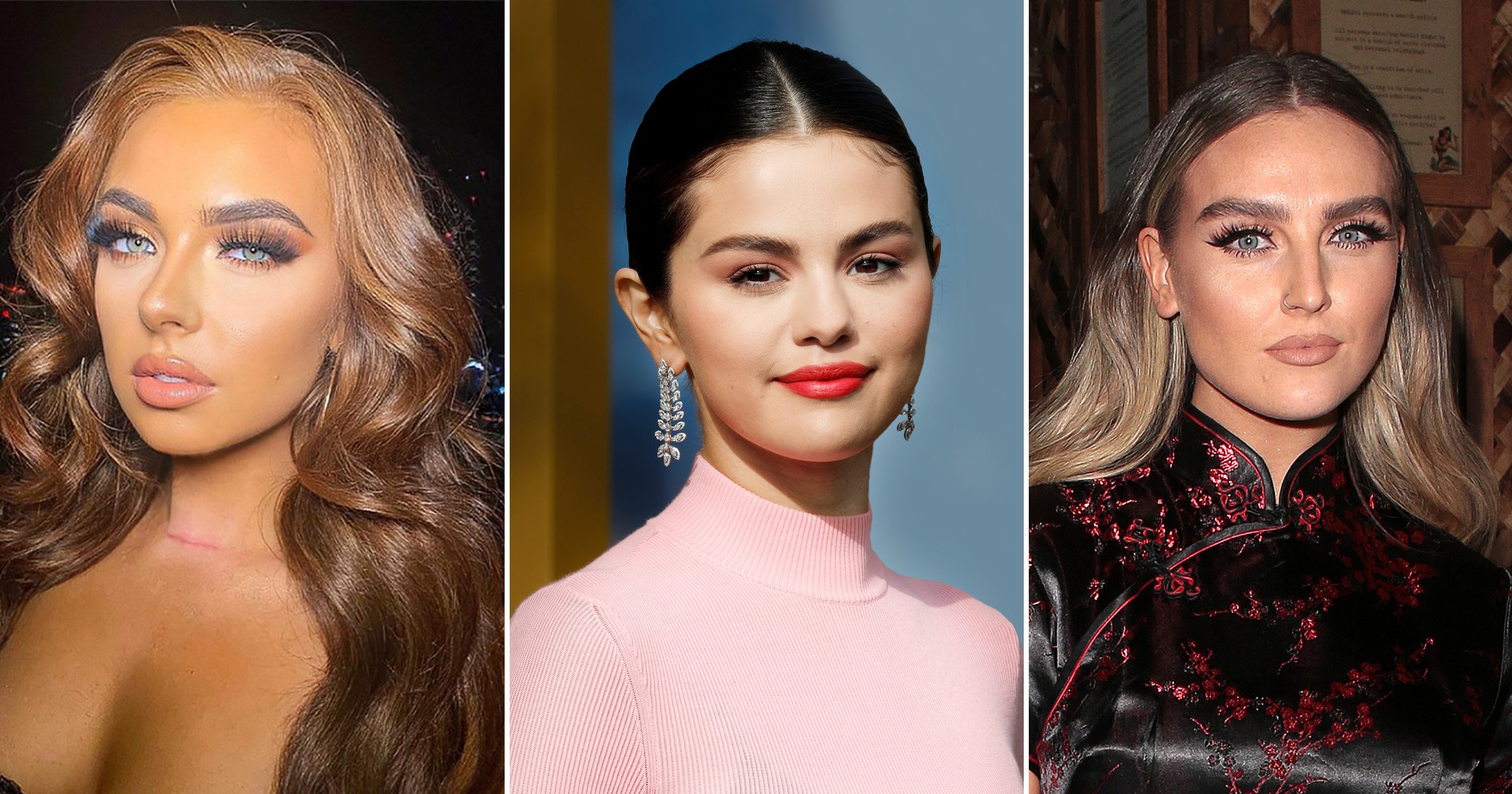 These stars have learned to love their scars (Picture: Getty)Scars are a natural part of life – we all get them – but they’re something that’s not often seen on celebrities.
However, an increasing number of stars have shared their scars and stories in order to help others as well as to normalise that fact that we all get them – famous or not.
From operations to accidents, raising awareness for conditions they were born with or to encourage their followers to get suspicious lumps checked out, here are all the stars who have owned their scars with pride.
Demi Jones
Love Island star Demi bravely shared her journey from getting a lump on her neck checked out to finding out she has thyroid cancer with her followers.
The reality star, 22, encouraged anyone with a lump they are worried about to get seen by a doctor after admitting to ignoring the swelling on her neck for years.
After having an operation to remove the tumour, Demi chose not to cover the scar in new photos she posted on social media as she continues to raise awareness for the condition.

Demi Jones has revealed the scar after her thyroid tumour was removed (Picture: Instagram/demijones1)Perrie Edwards
Little Mix star Perrie has not always been keen to show off the scar on her stomach, calling it her ‘biggest body hang-up’ in the early days of the band.
However, in recent years she has grown to embrace it, showing it off in bikini photos on Instagram.
She revealed that she had got the scar from multiple operations to fix her oesophagus, which was too small when she was a child, leading to problems eating.
Perrie also had further surgery on her oesophagus in 2018, but headed straight to The Ivy for her favourite chocolate bomb dessert after it was done.

Perrie Edwards has embraced the scar from oesophagus surgery (Picture: Instagram)Selena Gomez
Selena had life-saving kidney transplant surgery in 2017 and has proudly shown off her scar on social media since.
The singer and actress shared a photo of the scar on her inner thigh as she posed in a blue swimsuit, admitting it was hard to reveal it at first.
She explained: ‘When I got my kidney transplant, I remember it being very difficult at first showing my scar. I didn’t want it to be in photos, so I wore things that would cover it up.
‘Now, more than ever, I feel confident in who I am and what I went through…and I’m proud of that.’

Selena Gomez revealed the scar on her inner thigh from her kidney transplant (Picture: Instagram)Princess Eugenie
Princess Eugenie made a statement on her wedding day by choosing a gown which revealed the scar in the middle of her back.
The Queen’s granddaughter had had surgery on her back when she was 12, to treat a curvature of her spine caused by scoliosis.
She told This Morning before her wedding day in 2018: ‘I had an operation when I was 12 on my back, and you’ll see on Friday [at the wedding], but it’s a lovely way to honour the people who looked after me and a way of standing up for young people who also go through this.
‘I think you can change the way beauty is, and you can show people your scars and I think it’s really special to stand up for that.’

Princess Eugenie chose a wedding dress which showed off her scar (Picture: PA/Getty/EPA)Kylie Jenner
The Kardashians are known for usually sharing edited and ‘flawless’ images of themselves, so fans were refreshed to see Kylie Jenner reveal her leg scar in photos.
The youngest Kardashian-Jenner sister first showed off the four-inch scar on her thigh on Instagram in 2016 and on the cover of GQ in 2018.
She revealed how she got the cut in a fan Q&A in 2011, explaining: ‘When I was about five, my sister [Kendall] and I were playing hide and seek, and I hid inside this really tall, enclosed gate.
‘After a while, when my sister didn’t find me, I had to climb up on this sharp pole sticking out from the gate. I slipped, and the pole went into my leg. I tried pulling away to get the pole out, but it just tore through my whole leg.’

Kylie Jenner doesn’t hide the scar on her thigh (Picture: Instagram)Molly-Mae Hague
Molly-Mae shared her recent operation to have a large mole removed from her leg, which she later found out was a melanoma, a form of skin cancer.
She revealed the scar after the mole removal, encouraging others to get their moles checked after she admitted she had been walking around with it for a long time.
Molly explained: ‘Excuse my hairy legs but this is my scar from where I had my mole removed,
‘It doesn’t bother me. I never really even notice it but it has kind of now spread out a bit as its healed more. It’s kind of got a bit bigger but it doesn’t bother me at all and I’m just so lucky that I got my mole removed.’

Molly Mae shared the scar from her mole removal after finding out it was skin cancer (Picture: @mollymaehague)Kaley Cuoco
The Flight Attendant and Big Bang Theory star Kaley suffered an unfortunate horse-riding accident in 2010 which saw her break her leg.
The freak accident happened after a horse-riding lesson which had been going very well, but her horse spooked and threw her off but ended up treading on her leg in the commotion, which almost meant she had to have her foot amputated.
Thankfully doctors managed to save her foot and the actress often reveals the scar on the front of her left leg in red carpet photos.

Kaley Cuoco almost lost her foot in the horse-riding accident

The actress’s injury happened in 2010 (Picture: JC Olivera/WireImage)Katie Piper
Katie Piper has long campaigned for a ‘world not limited by scars’ after she sustained extensive burns following an acid attack in 2008 when she was 24 years old.
She has since shared details of the many operations she has had to go through since, as burns and scars tighten over time, and wants to help others not to feel they have to hide their own.
As well as the Katie Piper Foundation, the star also works with charities including Changing Faces to help others with visible scars.
She said in 2019: ‘We get emails that say because of seeing me in the public eye living life to the full with scars, people feel “proud” of their scars; that they no longer try and cover them but are happy to go out and live life confidently.
‘Burns is more widely discussed and less of a taboo subject – I see this myself through interacting with the general public and in my everyday life as a survivor with visible scars.’

Katie Piper has long campaigned for people to embrace their scars (Picture: Instagram)Amy Schumer
Amy Schumer recently shared a photo of the scar from her caesarean section from giving birth to her son Gene in 2019.
She shared the naked photo in order to normalise what women’s bodies look like after birth, writing: ‘Feeling like my c section looks cute today! #hotgirlwinter #csection’.

Amy Schumer often shows her caesarean scar as well as the realities of IVF (Picture: Instagram)

The comedian had a c-section with her son, Gene (Picture: Instagram)Gabby Allen
Like Princess Eugenie, Love Island star Gabby Allen also has a scar on her back from scoliosis surgery when she was a child, sharing a photo of it in 2018 to campaign to make scoliosis screening compulsory in schools.
Gabby explained: ‘The top of my spine was curving so much it had caused the bottom to do so too, resulting in a big ‘S’ shape. Therefore, my shoulders, hips and ribs were all being pushed out of line.’
She added that it was a process to get to love her scar, revealing: ‘I grew up being embarrassed of it. I’d walk side ways on down the beach so people wouldn’t see, I’d wear clothes or my hair down my back to cover it.
‘But now!!! I have no shame! People are intrigued and find it fascinating that I do what I do with such an impairment. And I’m proud of myself that I’ve managed to come so far and do so much. I never let this get the better of me!
‘So! Moral! Be proud of your bodies. Accept them for what they are. Forgive them for what they’re not. Understand them when they need a rest. Support them. Believe in them! Love them!!’

Gabby Allen wants scoliosis screening to be made compulsory in schools (Picture: Instagram)