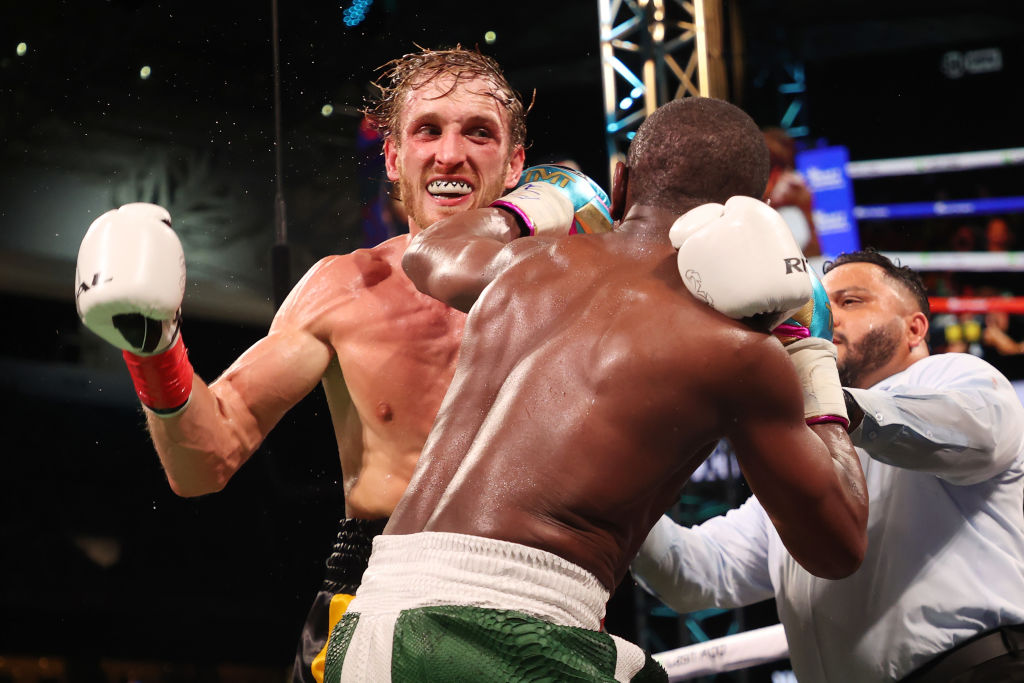 Mayweather was unable to put away the YouTuber (Picture: AP)Logan Paul went the full eight rounds in his boxing match with ring legend Floyd Mayweather Jr in Miami.
With no official winner in their exhibition bout with no judges present, Paul avoided a knockout defeat to go the distance with the five-weight world champion in front of a live crowd at the Hard Rock Stadium.
Mayweather, undefeated in a glittering 50-fight career, is expected to bank close to $100m for his part in the contest against a man who had previously fought just once under professional rules – a defeat to fellow YouTuber KSI in 2019.
26-year-old Paul weighed in over 30lbs heavier than his opponent heading into the fight, boasting a six-inch height advantage.
It counted for little with the 44-year-old ring legend comfortably outboxing the YouTuber, taking the air out of his opponent with vicious body shots from the third round.

Paul lasted until the final bell despite taking some big shots (Picture: Getty)Mayweather continued to land with ease, barely breaking a sweat with Paul holding onto his opponent throughout the final three rounds with little left in the tank.
The former champion however was unable to put away the younger man who continued to absorb some fine shots.
Mayweather pushed for the finish in the final minutes but Paul held onto see out the contest on his feet.
Mayweather initially retired from boxing in 2015 before returning for another hugely lucrative contest against UFC star Conor McGregor in 2017.
In 2018, he was tempted back into the ring again, showing up two hours late before demolishing Japanese kickboxer Tenshin Nasukawa in one round – earning a reported $9m for his three-minute workout.
With the market for celebrity boxing at an all-time high, Mayweather has insisted he will have no problem fighting again for the right price – with a possible meeting with Logan’s brother Jake another option going forward.

See also  Final trailer for 'A Quiet Place Part II' drops over a year after we thought it came out!!!