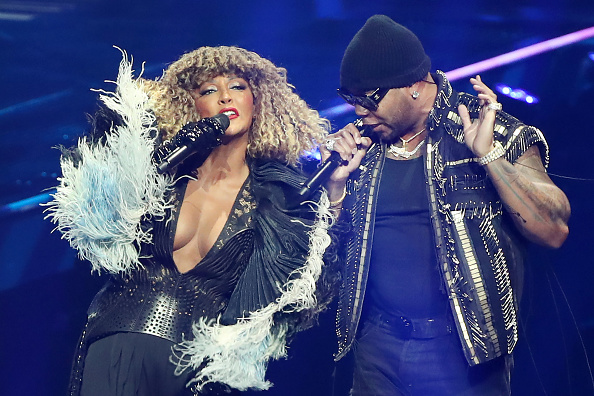 Ah Eurovision, you never let us down (Picture: Vyacheslav ProkofyevTASS via Getty Images)The line-up for the grand final of the Eurovision Song Contest is complete, after another 10 countries qualified in the second semi-final.
After the first 10 qualifiers were decided on Tuesday night, knocking Australia, Ireland, Romania, Slovenia, North Macedonia and Croatia out of the running, 17 acts took to the Ahoy arena (well, 16, plus Iceland) to compete for Europe’s votes.
While not as favourite-heavy as the first semi-final, there were still one or two heavy hitters in Thursday night’s line-up, in particular Iceland, Switzerland and San Marino.
Sadly for six countries, it was the end of the road, as Czech Republic, Poland, Denmark, Georgia, Estonia and Latvia didn’t make it through to the final.
Czech Republic’s Benny Cristo and his song Omaga were probably the biggest non-qualifier shock of the night, while social media seemed rather stunned that Denmark’s bonkers 80s throwbck Øve os på hinanden by Fyr & Flamme didn’t make it.
It seems the 80s was a hard sell as Poland’s The Ride by Rafal also got the chop, as did two powerful ballads from Estonia’s Uku Suviste (The Lucky One) and Georgia’s Tornike Kipiani (You).

Iceland have made it (Picture: PATRICK VAN EMST/ANP/AFP via Getty Images)Finally, Latvia’s Samanta Tina’s The Moon Is Rising also missed out.
But it was good news for Greece (Stefania’s Last Dance), Moldova (Natalia Gordienko’s Sugar), Serbia (Hurricane’s Loco Loco), Albania (Karma by Anxhela Peristeri), Portugal (Love Is On My Side by The Black Mamba), Bulgaria (Victoria’s Growing Up Is Getting Old), Finland (Blind Channel’s Dark Side), Switzerland (Gjon’s Tears and his song Tout l’Univers), Iceland (10 Years by Daði og Gagnamagnið) and San Marino (Adrenalina by Senhit), as they all got through to the final.
San Marino’s qualification means, rather surreally, that Flo Rida is now an official Eurovision finalist.
The Low rapper has teamed up with Senhit on her track Adrenalina, and while we’re not entirely sure if Flo Rida knows what is actually happening in Rotterdam, he looked pretty happy waving his Sammarinese flag in the green room.

Iceland fans also breathed a sigh of relief as the 2020 favourites made it through to the final, despite being unable to perform live.
One of the Gagnamagnið tested positive for coronavirus, and the band decided that none of them would perform if one couldn’t, so rehearsal footage of their performance of 10 Years was aired last night as they watched from a separate green room (with their two isolating bandmates represented by iPads).
The rehearsal footage will also be aired during the final tomorrow night.
The 20 qualifiers from the semi-final will now join the Big Five and reigning champions The Netherlands in the final.

The United Kingdom is represented by James Newman and his song Embers, Barbara Pravi is singing Voila for France, Italy’s Måneskin are competing with Zitti E Buoni, Germany’s Jendrik will sing I Don’t Feel Hate, and Blas Canto from Spain will compete with Voy A Quedarme, while Jeangu Macrooy will represent The Netherlands with Birth Of A New Age.
Italy and France are favourites alongside Malta’s Destiny and Ukraine’s Go_A, but it’s still all to play for after the running order was announced last night.
More: Eurovision Song Contest 2021

Cyrpus will open the show with Elena Tsagrinou’s El Diablo, while San Marino will close the show.
James Newman will perform in ninth place – the song on which we will all raise a glass to the late Sir Terry Wogan. That’s got to be good luck, right?
The Eurovision Song Contest will air at 8pm on BBC One on Saturday night.

MORE : BTS’s Jungkook appears to have got an eyebrow piercing after the Butter MV and the ARMY can’t cope