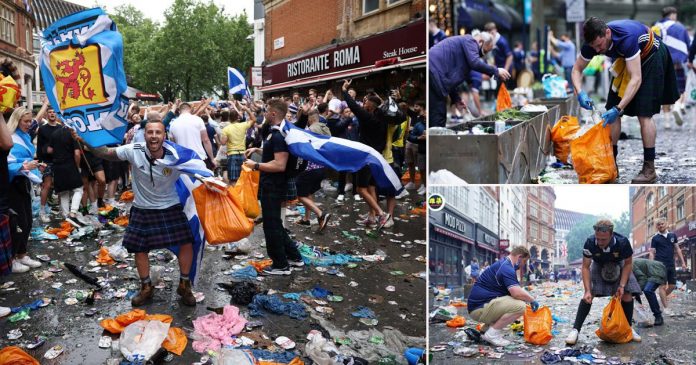 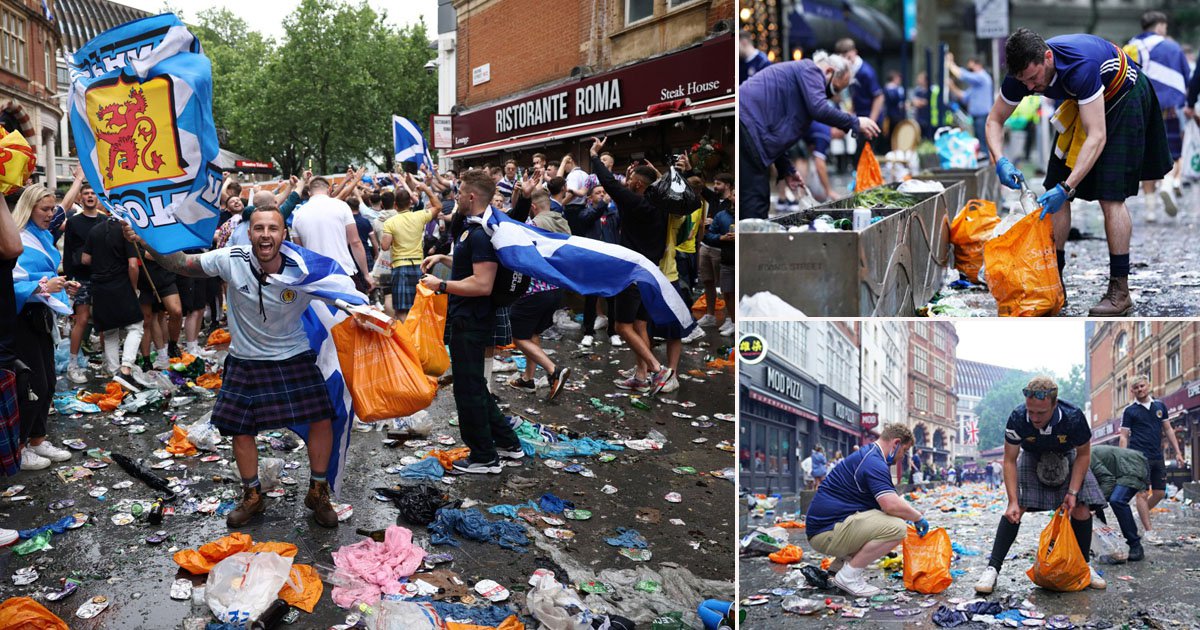 Conscientious Scotland fans have been tidying up after themselves in central London (Picture: PA)Scottish football fans have started picking up rubbish after thousands of them partied in central London ahead of tonight’s match against England.
Leicester Square was packed to the rafters with supporters sporting kilts with their country’s flag draped over their shoulders.
Fans set off flares and sung along to the chorus of ‘Yes sir, I can boogie’ — which has become an unofficial anthem of the Tartan Army.
As many as 22,000 supporters have flocked to the capital, but only 2,600 have managed to get tickets for Wembley.
With no official fan zone with a big screen provided due to Covid, the vast majority are likely to scramble to pubs with space for them.
There has been plenty of raucous behaviour over the past few days, including public nudity and swimming in water fountain, and belly-sliding on the rain-soaked concrete.
But conscientious supporters have also made an effort to clean up after themselves ahead of kick off at 8pm.

Supporters tried to clear away as much rubbish as they could ahead of kick off (Picture: PA)

This is the first time Scotland have qualified for the Euros since 1996 (Picture: Reuters)

Despite their best efforts, the streets are unlikely to be left spotless today (Picture: PA)However the sheer quantity of cans, glass bottles and plastic bags means well meaning fans are unlikely to leave the place as they found it.
Other groups gathered in Hyde Park, turning it into an unofficial fan zone, despite pleas not to gather in large groups due to the pandemic.
Supporter Mark Graham said: ‘It’s a pity but it looks like Scotland will make their own fan zones. We’ve booked a pub for last night and a pub for tonight so we’re well prepared.’
A spokesman for Mayor of London Sadiq Khan said: ‘It is not possible to hold a fan zone for Scottish fans in London due to the Covid restriction.
‘Fans should only travel to the capital if they have a ticket or a safe place to watch the match.’
Pleading with authorities to give fans somewhere to watch the game, Connor Wilson tweeted: ‘Just put a big screen up in Hyde Park next Friday and keep us aw happy, doesn’t take much.’
Get in touch with our news team by emailing us at webnews@metro.co.uk.
For more stories like this, check our news page.