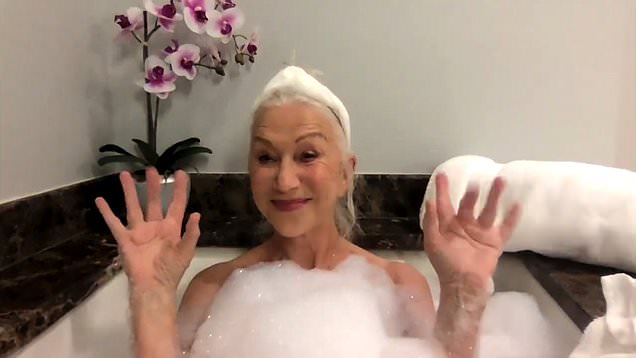 Dame Helen Mirren left TV presenter Jimmy Fallon red-faced when she turned up for an interview on The Tonight Show in the bathtub, describing it as her ‘favourite place’.
Dame Helen, 75, is set to reprise her role in Fast and Furious 9 as Queenie Shaw, the mother of two of Dom Toretto’s (Vin Diesel) former enemies.
While promoting the film, the esteemed actor made an appearance on Jimmy Fallon’s Tonight Show in the US over Zoom… although the host definitely wasn’t expecting her to be sat in a bathtub filled with bubbles when she showed up on screen.
As Jimmy, 46, introduced her, he burst into laughter and applauded her as he realised where she was.
‘Oh my God, you are the absolute… you are the greatest. Oh my God, I love you!’ he exclaimed as he got up on his feet.
Dame Helen waved at Jimmy and his audience, wearing a headband as the bubbles covered her up to her neck.

Jimmy bows down to Dame Helen as she shows up on screen (Picture: NBC / Backgrid)

The dame said that the bathtub was her ‘favourite place in the world’ (Picture: NBC / Backgrid)‘I’m in my favourite place in the world,’ she said, as Jimmy revealed that she ‘might be the first guest ever to be in the bathtub on the Tonight Show’.
The Queen actor said that’s what she finds ‘so brilliant about Zoom’, that she can do interviews from wherever she would like.
I was thinking, you know: “Why not be in the place you love to sit and chat to people?” I love to chat to my husband while sitting in the bath, so why not do it to the whole of America?’ she said.
While Jimmy remarked that her decision was ‘very smart’, which is why she’s ‘the best’, Dame Helen admitted that she was ‘running out of bubbles’.
‘You’re chatting away and my bubbles are going down!’ she warned.
Jimmy promised that he would ‘make the interview very fast then’, as Dame Helen quipped: ‘Yes fast and furious!’ What a plug.
More: US TV news

During their interview, Dame Helen revealed that her Fast and Furious character Queenie was named after one of her aunts, who had the same name.
She explained that her aunt in question came from a ‘big East End family with 14 kids’, stating: ‘It was a very old London family and I had an Auntie Queenie. It’s a proper East End name Queenie so I thought that would be a good name for her to have.’
The Tonight Show Starring Jimmy Fallon airs weeknights on NBC.
Got a story?
If you’ve got a celebrity story, video or pictures get in touch with the Metro.co.uk entertainment team by emailing us celebtips@metro.co.uk, calling 020 3615 2145 or by visiting our Submit Stuff page – we’d love to hear from you.

MORE : Cardi B teases ‘tricks up her sleeve’ in Fast and Furious 9 and we bow down to new action queen