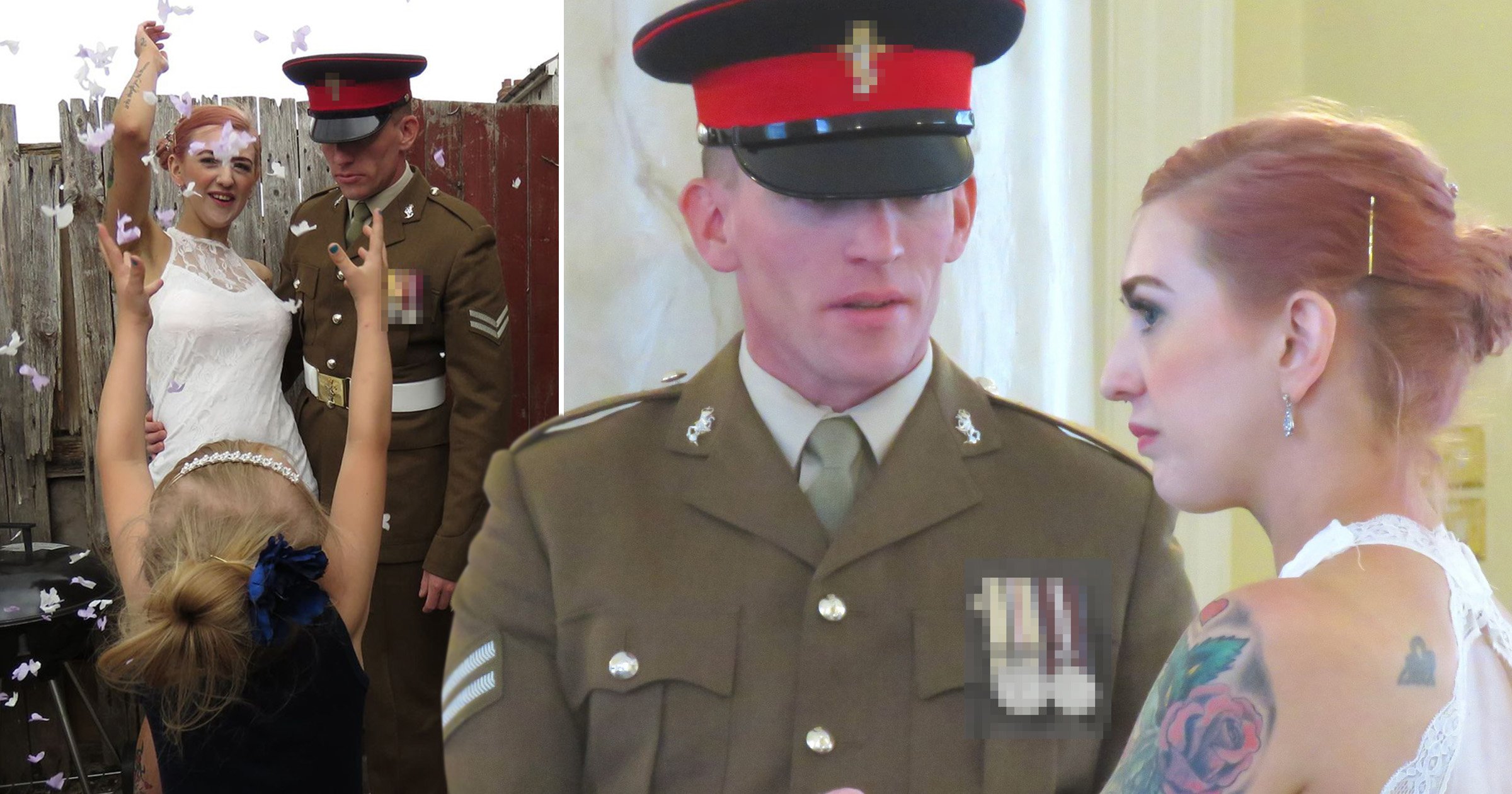 Craig and Samantha married last August, 17 years after they lost touch (Picture: Mercury Press)17 years ago, Samantha and Craig Redhead were both reservists in the Army and became close friends.
But after moving around they fell out of touch and went on to lead separate lives.
Samantha, 34, moved from Doncaster, South Yorkshire to Ayr, Scotland and had five children with her partner.
But when they split in late 2019, just before the coronavirus pandemic and lockdown, after he admitted an assault charge, she returned to her home town.
During lockdown, looking for some local friends, she connected with Craig online – and the pair found the connection was there just like it had been 17 years before.
This time though, their relationship moved beyond friendship and they fell in love.
Now, just over a year after reconnecting they’ve married in front of just 15 friends and family.
Speaking today from the home in Doncaster she now shares with Craig, lifeguard Samantha said: ‘We had just lost touch. He was deployed to Iraq when we were young and friends. He is no longer in the Army but obviously back then, communication was different to how it is now. There was no Facebook or anything – even phones were different.

Craig and Samantha on their wedding day (Picture: Mercury Press & Media Ltd)‘So I began thinking about him and, off the cuff, just searched online on Facebook and found him again.
‘I lost touch with him. He had changed his phone number so I was so glad to find him online.
‘We began chatting and it all snowballed really.’
With restrictions in place, they got to know eachother again with virtual dates, having drinks and meals together over Zoom, as well as audio dates where they would just chat over the phone.
The lifeguard added: ‘I found him very attractive. He is quite well-built and I like gingers. He’s got such a lovely character too. He is nice inside and outside, and what’s what I really like about him.
‘He loves my kids. He has actually taken them on like they’re his own.
‘We had to do Zoom dates and audio dates so we had meals and drinks together over Zoom calls, which was unusual but the conversation was good. When he was able to come over and visit me safely, he did.’

The couple had a whirlwind lockdown romance (Picture: Mercury Press)In August, when they were finally able to spend time together in person, Craig proposed at home and they decided to get married as soon as possible.
‘It was lovely. We’d found love in lockdown,’ Samantha said.
Craig, who also has kids from a previous relationship, married Samantha at a registry office in Doncaster.
He said: ‘We had the wedding with just 15 guests. We had always wanted a small ceremony so thought we’d just marry as soon as possible really. It was good, a proper lockdown wedding.
‘It was absolutely amazing, just a small group of family and friends. My family were so happy for us both. I’m really close to my family.
‘We just wanted to get married. You never know what the future holds.’
The pair want children together but have struggled to conceive and are thinking about looking at IVF.
More: Relationships

Samantha said: ‘He wanted a child but, obviously, we wanted to wait until we got married. Now we have married, we are keen to have a child.
‘IVF looks the best route at the moment.
‘Lockdown puts a new perspective on life. It makes you look at what you’ve got and what you really want in life.
‘Our love is a blessing. It’s been an incredible year or so.’
Do you have a story to share?
Get in touch by emailing MetroLifestyleTeam@Metro.co.uk.

MORE : Childhood sweethearts rekindle relationship after bumping into each other in Spain 34 years later

MORE : Couple told they can’t marry at 15 do it 22 years later with same engagement ring

See also  When will it release? Latest Details of the Anime here!!!

MORE : Dog and bunny best pals are so pampered they have over 150 outfits