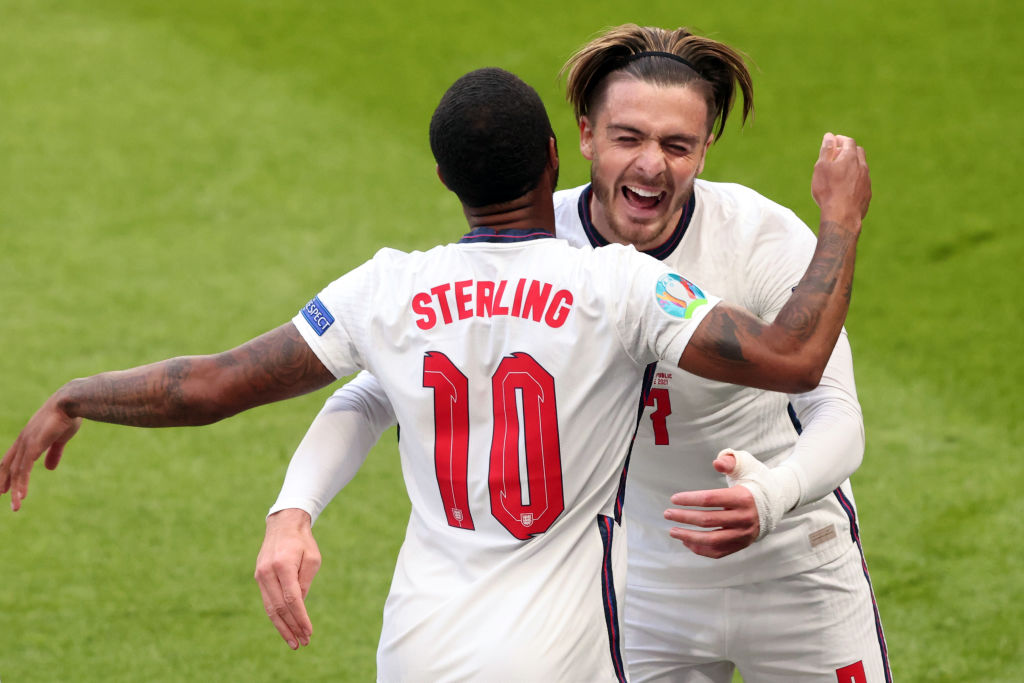 Jack Grealish assisted Raheem Sterling’s winning goal for England against the Czech Republic (Picture: Getty)Frank Lampard has praised the performances of Bukayo Saka, Jack Grealish and Luke Shaw after England beat the Czech Republic to progress to Euro 2020’s last 16 as Group D winners.
The Three Lions had already secured qualification thanks to results in Groups B and C 24 hours earlier and Raheem Sterling’s first-half header ensured Gareth Southgate’s men will be playing on home soil in the next round.
There was a clamour for Grealish to start ahead of the clash and the Aston Villa captain grabbed his opportunity with both hands, providing an exquisite dinked assist for England’s winning goal and shone throughout his 68-minute appearance.
There was some surprise as Bukayo Saka was picked in the starting XI ahead of Jadon Sancho but the Arsenal youngster proved his doubters wrong and came away from Wembley with the ‘Star of the Match’ award.

Saka was named man of the match at Wembley (Picture: Getty)Analysing England’s victory in the BBC Sport studio, Lampard said he was pleased to see Southgate’s side play a more ‘exciting’ brand of football in the wake of last Friday’s goalless stalemate with Scotland.
‘Scotland was the main one where we all sat up and said, “We don’t like that”, and I’m sure Gareth would have addressed a lot of things going into yesterday,’ the ex-England and Chelsea midfielder said.
‘I felt that we picked up the speed of the game, in that first half, much more than we have done at this tournament so far with Saka turning for the first goal and going past them and breaking the line.
‘Grealish will always do that and we just had more speed. We were penetrating with Luke Shaw arriving as well so it was more exciting.
‘To try and have sustained periods in the opposition half and maybe be a bit better on the ball is something we need to look at.’

There are fears Mason Mount and Ben Chilwell may be forced to miss England’s last 16 fixture, with the pair having to isolate after coming into contact with Scotland’s Billy Gilmour – who since tested positive for Covid-19.
But Lampard said he ‘wouldn’t be surprised’ if Southgate starts Mount even if he is only able to train on his own in the build-up to the match.
‘His fitness is unquestioned. How he’ll handle himself, I’m not sure what the practical nature of it is – whether he can get out there and train,’ the former Chelsea manager added.
‘But if he can train on his own and keep himself on a level then I think we’ve seen Gareth rely on him.
More: US

‘With the level of game that we’re going to have where we will need to be good on and off the ball, Mason is a very complete package.
‘I just sense that if he can train on Monday evening and get him anywhere near fit then I think Mason is so intelligent.
‘He’s so intelligent that I think part of the game-plan going into the game, you can drop it to Mason in the meetings and he picks things up so I wouldn’t be surprised if he relied on him whatever.’