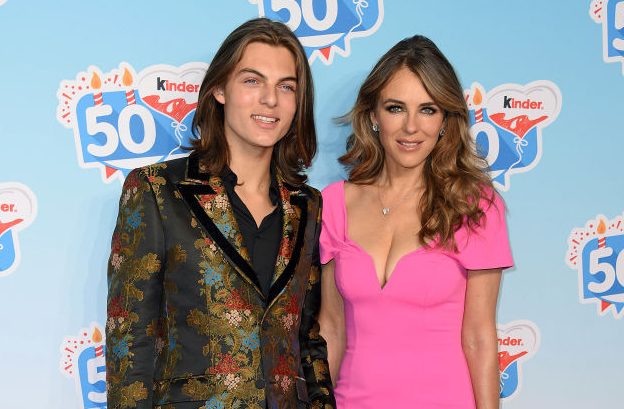 Liz Hurley’s son Damian has shared a sweet message about his family (Picture: Getty)Liz Hurley’s son Damian has sent a heartfelt message amid the news he has been cut from his grandfather’s family trust fund, losing out on a reported £180m inheritance.
The actor’s father Steve Bing took his own life aged 55 in June 2020. A year on, his grandfather Dr Peter Bing successfully appealed a decision that would have included Damian and and his half-sister Kira Kerkorian, 23, in trust funds worth up to a billion dollars (£725m), on the basis that they were born out of wedlock during Steve’s relationships with Liz and Lisa Bonder respectively.
Damian, 19, shared a photo of him with his mum, siblings and extended family on Instagram just two days after the news was made public.
‘Grateful for my beautiful family, today and every day,’ he said in the picture caption. He was left messages of support in the comments from fans and famous pals including Naomi Campbell and Irina Shayk.
In a statement to Daily Mail the Bedazzled star described Dr Bing’s appeal as ‘callous’.
‘When Stephen took his own life, he died thinking his children were going to be taken care of. What Stephen wanted has now been callously reversed. I know Stephen would have been devastated,’ she said.
‘Stephen fought very hard in his last year to have his children recognised and repeatedly told me how incredibly important this was to him.
‘He was happy beyond belief that the trial verdict ruled that Damian was to be treated like his sister’s children as far as the trust was concerned.
‘I am just relieved that Stephen will never know that Damian’s relatives — Stephen’s father and the family of his sister Mary — were ultimately successful in their appeal against the original trial verdict.’
Lisa Bonder added: ‘As a mum, I wonder why on earth this had to happen. Why make two innocent kids into victims?’
Following the appeal the trust will now be split between the children of Steve’s sister Mary Bing – Anton Ellis, 19 and Lucy Ellis, 21, – both born in wedlock.
Damian, who has definitely inherited his mum’s striking looks, has also made a name for himself in the world of fashion starring in campaigns for Pat McGrath.
Got a story?
If you’ve got a celebrity story, video or pictures get in touch with the Metro.co.uk entertainment team by emailing us celebtips@metro.co.uk, calling 020 3615 2145 or by visiting our Submit Stuff page – we’d love to hear from you.

FIVE THINGS THAT CAN MAKE YOUR CHILD FOCUSED AND ACTIVE WHILE...